Analyse the likely structure of the global economy and whether the current global imbalances are likely to remain a feature of the world economy.

The past global economic structure could be best described as a bipolar system primarily governed by the competing countries of the United States of America (USA) and the Soviet Union (USSR). However, the end of the Cold War transformed the bipolar model into a multi-polar economic framework where the USA, the European Union (EU) and Japan became the most influential economic powers.
At present, the multi-polar nature of the global economy has grown as a result of the dynamic expansion of Brazil, Russia, India and China (BRIC). Therefore, it could be suggested that the global economy has been reshaped by the presence of a greater quantity of powerful economic actors (Wilson & Purushothaman, 2003). However, whether this is likely to result in greater imbalances or improvement in the better allocation of economic wealth is the subject that is analysed and discussed in this assignment. The paper focuses on how BRIC economies and in particular China, as the most obvious example of an emerging high-growth economy, are currently influencing the world’s economic features.

Of the BRIC economies, China is currently sustaining the greatest growth through a policy of trade openness. As can be observed from Figure 1, the country’s GDP growth is substantial and it is primarily contributed to by the country’s export orientation. In comparison to other developed countries, 70% of China’s GDP is the result of trade activity, whereas it contributes to the GDP of the United Kingdom (UK) and USA in the region of 37% and 20%, respectively (Venables & Yueh, 2006).

One of the main areas in which China can be argued to have substantial economic influence is global trade. As the country has significant capacity and a labour-intensive comparative advantage, the global supply of labour-intensive manufactured goods has grown extensively. This has resulted in greater global competitiveness in the supply of these products which has subsequently resulted in lower product pricing (Lin et al., 2006).
Although, lower pricing is likely to benefit consumers, it can also have an adverse effect on global suppliers which need to cope with the pressure of cutting production costs and decreasing labour wages. This is the reason why countries which export similar goods to those of China are likely to lose out, whereas those which import China’s manufactured products are likely to gain competitiveness (Venables & Yueh, 2006).
Furthermore, the macroeconomic impact on employment is also likely to be substantial not only because of the decreased wages of labour-intensive products, but also because of the overall reduction of demand for an unskilled labour force. However, the decreased need for unskilled labour could promote the need for skilled labour, which is beneficial to global economics because skilled labour is generally recognised to be capable of producing more sophisticated products and services to improve product quality and environmental sustainability (Begg & Ward, 2003).
On the other hand, as it is believed that China’s proactive trade openness and supply of low-cost products have positive impacts on stabilising global inflation, it could also be proposed that an employment shift that favours high-skilled labour is likely to inflate the money supply due to higher wages and more expensive products such as cutting edge electronics (Kaplinsky & Messner, 2008).

Apart from the likely impacts of China on supply, the demand side is also likely to undergo significant shifts. The growing industrialisation of China and other BRIC economies could result in greater demand for raw materials and commodities (Lin et al., 2006). At present, China is one of the world’s largest consumers of oil, iron ore, coal, steel and aluminium (Venables & Yueh, 2006). There are some findings that suggest that China’s significant demand growth has substantially contributed to booming commodity prices, which is likely to have controversial global impacts – oil-exporting countries will be better off in comparison to oil-importing ones (Kaplinsky & Messner, 2008). In this respect, Russia, as a leading producer, would gain substantial global-scale competitive advantage.
On the other hand, the fast industrialisation of China is likely to result in the country’s trade penetration in a number of developed markets where technology-intensive products are distributed. Moreover, it has also been suggested that the country’s comparative advantage is no longer reliant on labour capacity (Venables & Yueh, 2006). Figure 2 clearly outlines the country’s shift to the production of technology-intensive products. 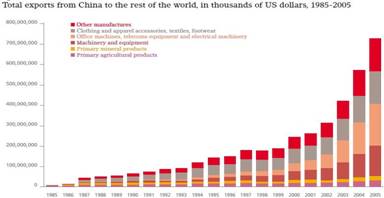 The most fundamental trade impacts of the BRIC economies can be categorised as quantity and income related. In other words, quantity effects will have an impact on the different relocations of resources due to different sectors’ expansion or shrinkage, whereas trade income will be influenced by changes in trade terms, partnerships and pricing (Venables & Yueh, 2006).
In this context, it could be suggested that economic unions and trade partnerships will play a fundamental role in the allocation of global wealth. China has been growing in interregional trade cooperation, which could lead to a further shift in raw materials allocation and a better bargaining supply power for Asian economies. Moreover, the competitive positioning, economic potential and internal private sector transformations of China have attracted a great number of foreign direct investments, which is another example of the shift in resource allocation and global imbalances (Kaplinsky & Messner, 2008).

Based on the findings presented, it could be suggested that global imbalances are likely to remain a feature of global economy. Based on the contracting and expanding of different economic sectors it could be proposed that the demand and supply shifts of economic resources and global wealth are likely to remain as key sources of future imbalances.
On the other hand, it should be emphasised that a future global imbalance is likely to have different characteristics in comparison to the one in the previous bipolar structure of the global economy. In other words, global resources will be dispersed over a greater number of competitive economies, but this diversification and greater quantity of powerful market actors does not imply better allocation of global wealth.
Furthermore, it could be proposed that the growth of these countries would be at the expense of weaker and less-developed economies. In this respect, social well-being would be negatively affected because many countries would be unable to allocate savings to promote public policies due to their current account balance deficit. Moreover, even developed countries such as the USA, which sustain substantial account balance deficits (see Figure 3) due to continuous re-investment of capital, may be challenged in terms of allocating finances to community well-being (Rajan, 2005). 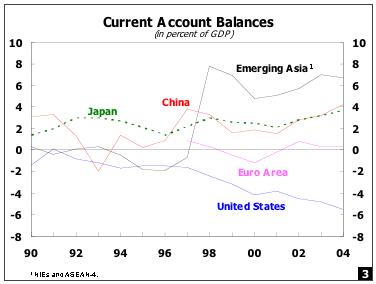 This could therefore be a fundamental threat to global economic sustainability because the essence of an economic system is to generate social prosperity and long-term opportunities.

Do the US and Japan follow the Phillips curve phenomenon?
A study on the quality of shelled eggs marketed in and around Hyderabad – India
EMPOWERMENT - The Need, Barriers, Measures and Implications
Examine the depiction of nature in relation to the treatment of the human condition in the poetry of...
A Critique - ‘(Re)figuring accounting and maternal bodies: The gendered embodiment of accounting pr...
The analysis of quality control as a process
Online Chat WhatsApp Messenger Email +44 800 520 0055
We value your privacy. We do not sell your data and do not resell our papers. We use cookies which you can view and control.