This essay offers a detailed discussion of whether underestimation of costs in public work projects constitutes error or is actually a lie. This discussion is based on the analysis of Flyvbjerg et al. (2002) that showed that psychological, economic and political causes usually affect the integration of risk factors in project budgets. Taking the analysis of Flyvbjerg et al. (2002) as a backdrop, this discussion begins with a literature review. The literature review presents the arguments for whether the underestimation of costs in projects is a result of estimating errors or whether it is a complete lie. Based on the arguments presented in the literature, a conceptual framework is presented to highlight the reasons that costs and/or time can exceed forecasts in a project. This conceptual framework is applied to a public sector project (such as infrastructure for public transport) in the next section of this essay to establish whether the underestimation of costs in public works projects is due to error or to a lie. The project under discussion in this essay will be the notable delay of the Edinburgh Tram Line that has consistently failed to achieve the timelines for completion and has cost overruns (Lowe 2011). The discussion of the delays in this public works project will help to throw light on the errors and lies that engulf the completion of public works projects. The next section, thus, examines the literature published in the field of project management for cost and time estimates.

The UK Public Works sector has often been criticised for the cost and time overruns in its projects. Flyvbjerg et al. (2003) have analysed numerous transport infrastructure projects across various continents and have concluded that these projects present low performance and escalated costs. When investigating the data presented by Flyvbjerg et al. (2008), it can be seen that, on average, the costs of 20.8 per cent of road projects, 33.8 per cent of bridges and tunnels and 20.4 per cent of road projects are estimated inaccurately.

Flyvbjerg et al. (2002) own that these inaccuracies are due to political, economic, psychological and technical explanations from the forecasters. However, they conclude that cost underestimation cannot be explained by errors and can be best explained by strategic misinterpretation, i.e. lying. Flyvbjerg et al. (2005) refer to strategic misinterpretation as ‘optimism bias’ which can be defined as the bias forecasters show in their estimates when planning projects, especially those that are long term and involve high investment. Flyvbjerg et al. (2005) have further explained that estimators usually quote low figures and high ROI to the investors and sponsors so that projects are approved. This results in cost overruns since the estimated costs (in order to be kept to bare minimum) do not include risk factors.

Based on the observations of Flyvbjerg and COWI (2004), the following figure describes the inaccuracies in cost forecasting / cost escalation in the UK Public Works projects classified as rail and non-rail works. From the figure below, it can be seen that approximately 15 per cent of the projects have cost overruns of more than 40 per cent. 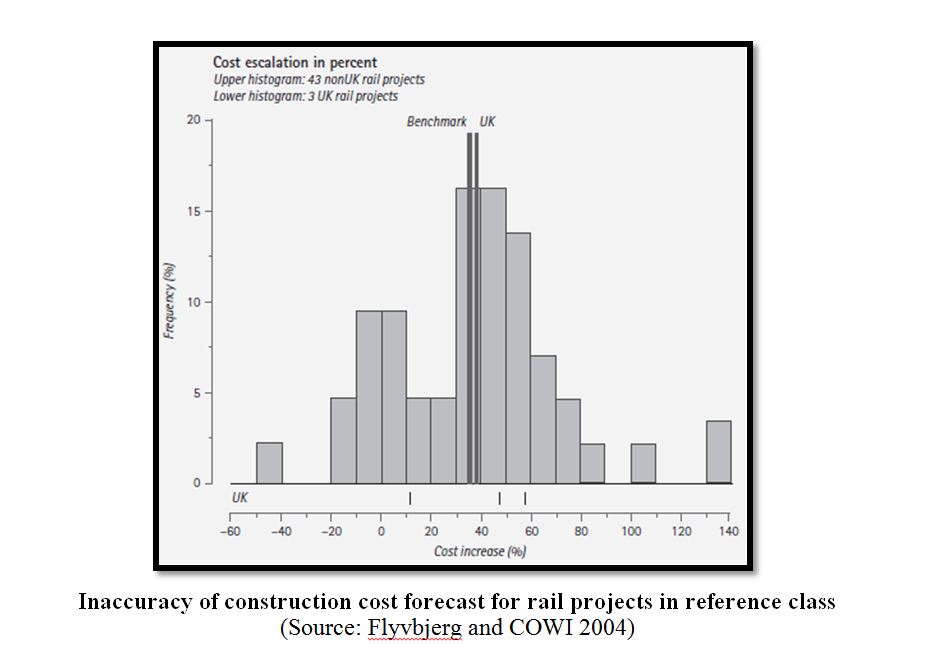 The above inaccuracies have also been observed in the writing of Morris et al. (2011) who highlight that the root cause of underperformance and cost overruns in public works projects is the systematic underestimation and ignorance of the estimators towards complexity risks, demand forecasting and scope changes.

Viewing the cost underestimation as error or strategic misinterpretation to win sponsors, Morris et al. (2011) provide a formula for securing approval and funding for a project:

The above formula is used as a conceptual model for the analysis of this essay.

Many authors in the field of public works procurement have mentioned that project approval, especially for large infrastructural public works, is secured by showing underestimated costs and overestimated benefits because it is usually the lowest cost bidder who is selected as the contractor (McCrudden 2004, Grimsey and Lewis 2007 and Love et al. 2008). In a public works project, it is usual for the scope of work to be defined along with the technical requirements and other necessary details and the tender / RFP is floated for response from the major infrastructure contractors (Love et al. 2008). To ensure that the bid of the prospective contractor is selected, the contractor’s forecasters / estimators will purposefully ignore the variable costs. These can be the daily wages of extra labour or wages below the National Minimum Wage for the extra daily labour, costs involved in proceedings / transactions or legal affairs, etc. (Grimsey and Lewis 2007). In addition, PPPs have often been in trouble in cases such as the notable failure of Metronet in 2007 which cost the taxpayers £410 million (Telegraph 2010). According to the NAO (2009), Metronet’s failure was largely due to poor corporate governance and leadership and the differing interests of the five shareholders involved in this contract. This resulted in cost overruns and a shortfall in funding for the Metronet in a seven-and-a-half-year period (April 2003– October 2010). 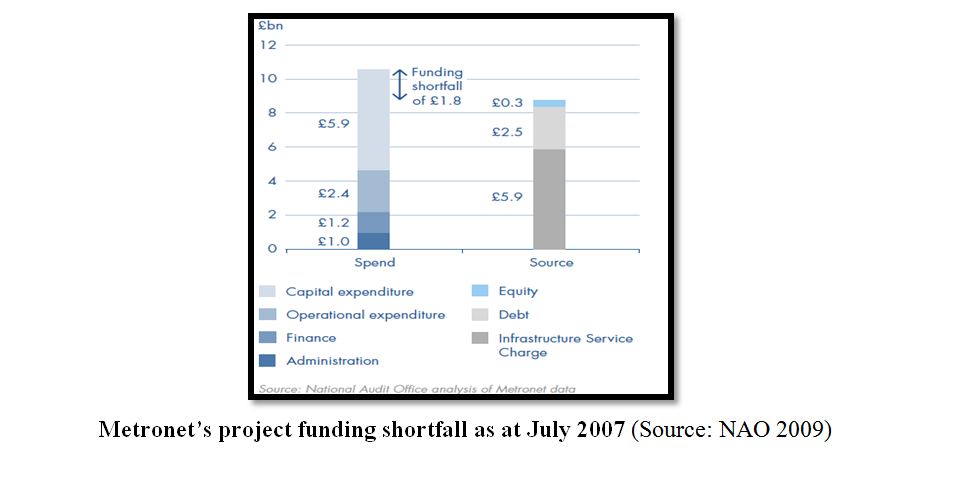 The above figure describes the shortfall in funding for the Metronet project. It was finally scrapped in 2010 because the PPP of the Metronet and London Underground (NAO 2009) broke down. In the PPP between Metronet and the Department of Transport, the lack of clarity on the scope of work and the heightened complexity amongst the various stakeholders and transfer of funds led to the ultimate failure of Metronet.

To continue the discussion on whether the underestimation of costs in public works projects occurs because of errors by forecasters and estimators or is a complete strategic misinterpretation (i.e. a lie), the next section compares and contrasts a public sector project against the proposed framework, i.e:

Edinburgh Tram Line is the Scottish Government’s fourth largest project and was finally approved in 2007. However, in 2010 various public concerns were raised about its completion (AGS 2011). The government committed £500 million to the construction phase of the project with the extra costs not exceeding to the total approved budget of £545 million. The project was expected to be completed by 2010 but construction is still underway and completion is not expected to occur before 2013 (AGS 2011). Furthermore, the project’s first phase had cost the government £402 million that represented 75 per cent of the total approved budget (AGS 2011). Lowe (2011) discussed that the Edinburgh Tramline was a PPP project that involved four contractors for the four services required in the project:

The disputes in the project occurred because of the differences in the estimated value of the project and the actual required cost to run the project. For example, the INFARCO contract, which was initially valued at £165 million, ran into trouble when the contractor claimed for £100 million in this fixed price contract (Lowe 2011). Further, the INFARCO and MUDFA works have been behind schedule from the beginning; the contractors claimed that the works could not be completed before early 2014 while the initial estimated completion date was 2011 (Henderson 2010). Before analysing the current state of the project, the following Figure describes the status of the project until 2011: 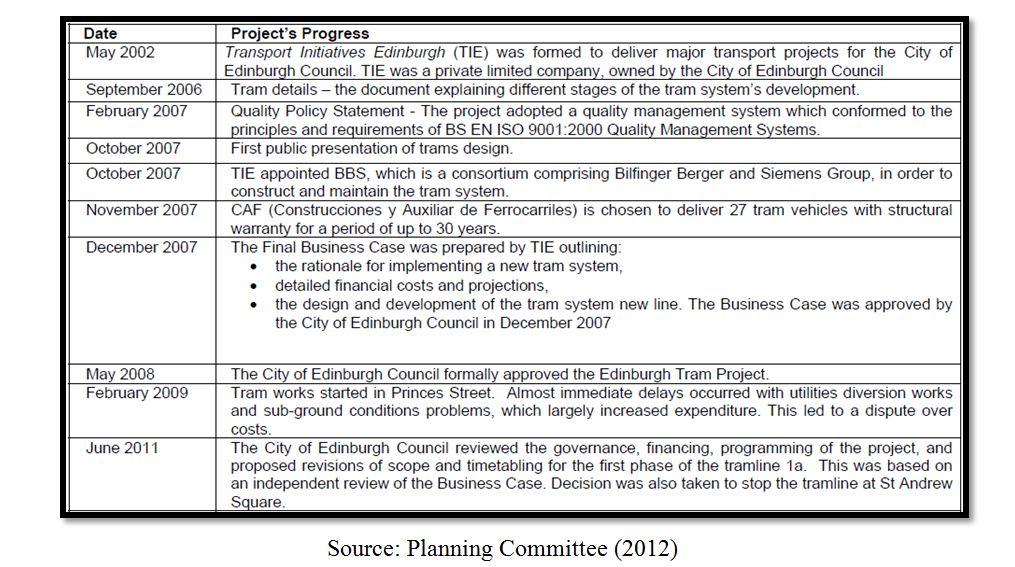 The above status report confirms that until June 2011, the efforts of the Edinburgh Council were to review the scope, governance and financing of the project to ensure the project was completed. Miller (2011) also analysed that the project was affected by cost and time overruns as the scope of the work was complex and the design of the routes needed to be altered many times. These extra costs impacted on other stakeholders and contractors and a solution to the problem seems impossible (Miller 2011). The project became chaotic; the estimated costs rose to £776 million and when interest was included, it was estimated that payments could reach £1 billion (Miller 2011). This project, when compared against the author’s proposed framework, reveals that projects (especially large infrastructure projects) get approved if they propose low costs and high benefits. For instance, the Edinburgh’s Tramline project was expected to cost the City Council £500 million but this estimate did not include design changes, scope amendments or any extra layover costs. Thus, the first 70 per cent of the budget was used in the completion of a mere ten per cent of the project.

The next section discusses the contrast between the theoretical estimates and the costs involved in the practical implementation. In addition, a conclusion is reached that highlights that cost underestimation in the projects is a strategic misinterpretation due to ignorance of optimism bias.

Contrast between theory and practice – Discussion

As seen in the review of the literature, Flyvbjerg (2011) highlights that the failure of large public works projects is due to strategic misinterpretation by the forecasters and contractors to the sponsors by promising high benefits for low costs. Further, it is necessary for the sponsors to understand the element of optimism bias in the proposals submitted by bidders and a specified cost should be allocated to this criterion (Flyvbjerg et al. 2005).

When looking at PPPs through the example of Metronet, it can be seen that the responsibilities and relationships between the stakeholders are extremely complex, especially in a large infrastructure setup which involves various authorities and even changes in the Government (Grimsey and Lewis 2007). Theoretically it can be said that, in practice, the contractors are yet to overcome underestimation of costs in their projects to overcome the ultimate failure of the whole project. The theory of strategic misinterpretation as presented by various authors (Flyvbjerg et al. 2002-2011) holds correct in the case of large infrastructural projects as in the case of the Edinburgh Tramline wherein the contractors failed to include cost-related changes in scope and design in the estimated budget of £500 million. Had these costs been estimated and accounted for earlier and brought to the notice of sponsors at the beginning of the project, the Tramline project could have been cancelled or been restructured to meet the public expectations (Lowe 2011).

Another agreement to the practice is the theory of PPP partnerships wherein the complexity of the stakeholder relationship was ignored and resulted in complete failure of governance of the project. Thus, taking into account the theories of why large infrastructure public works projects fail, it can be said that the Edinburgh Tramline project serves as an example of the dangers of ignoring the theories of optimism bias, strategic misinterpretation and complexity of PPP partnerships. In addition, the project confirms the author’s conceptual framework that low costs for large benefits are used as a tool by the contractors to win public works contracts.

About me:
I have a Master’s in Marketing Analytics & Management Science from a UK University Management School, UK. I work as a Product Manager for a leading corporate travel portal and in my spare time I like to read books and daily blogs. In addition, I have a Bachelor’s degree in Commerce and hold Diploma Certification in Advertising, PR and Marketing. Although I have been writing for almost four years, I still love the challenge of the unique assignments that come along. My areas of expertise include: Business, Management, Marketing, HRM, Strategy and Project Management. I also like to explore the fields of Sociology, Corporate Social Responsibility, Ethics and Gender Studies