What are the key factors which help motivate employees in KFC?

A number of factors are identified by the researchers and investigators which motivate employees in the organisations and result in enhanced productivity and job satisfaction.

Old and contemporary theories of motivation propose various factors which play a significant role in employee motivation. Some of these theories will be investigated to identify certain motivators in the organisations. Robbins et al (2009) reveal that according to Abraham Maslow’s hierarchy of needs every human being has a hierarchy of five needs (Maslow, 1954) as shown in Figure 1 below; 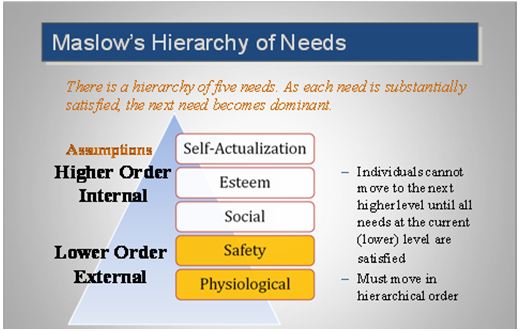 Robbins et al (2009) suggest that physiological needs such as hunger, thirst, shelter, sex and safety needs such as security and protection from physical harm are lower-order needs. These needs are satisfied externally by salary, tenure, wages, etc. However, social needs such as affection, sense of belongingness, acceptance, friendship, esteem needs such as self-respect, autonomy with achievement, status, recognition and self-actualisation needs such as self-fulfilment and achieving one’s potential are higher-order needs. These needs are satisfied internally within the individual. However, this theory believes that an individual’s motivation is based on fulfilment of certain needs in a hierarchal manner and individuals only get motivated to achieve higher level needs when preceding level needs are fulfilled. This theory is widely accepted by managers to motivate the employees in the organisations.

In comparison to Maslow’s needs hierarchy, Frederick Herzberg proposed different factors which can motivate employees in the organisations. The two-factor theory (also known as motivation-hygiene theory) (Herzberg et al,1959) reveal that a satisfied employee in the organisation may be dissatisfied but this dissatisfaction does not affect the motivation level. So, if managers try to remove dissatisfiers from the job then peace may be brought but not necessarily motivation. As shown in Figure 2 below, satisfaction and dissatisfaction are not opposite of each other according to this theory. 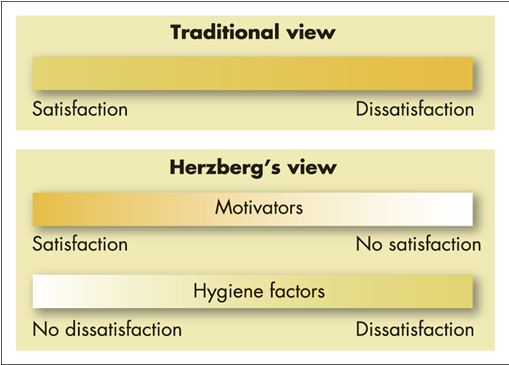 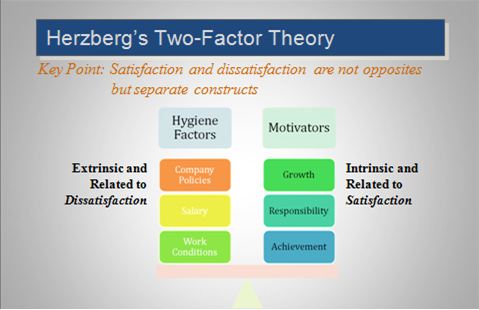 However, the list of motivators is quite long and the issue is which motivating factors are more effective in improving employees’ productivity and effectiveness. According to Robbins et al (2009) McClelland’s theory establishes the relation between need for achievement and productivity and suggests that need for achievement is the drive to excel or succeed is the strongest motivator.

According to goal setting theory employees are motivated by difficult goals (Locke and Latham, 2002) because specific and difficult goals, with feedback, lead to higher performance. However, self-generated feedback (employees monitor their own progress) is a more powerful motivator in comparison to externally generated feedback (Ivancevich and McMahon, 1982; and Locke, 1996 and Robbins et al, 2009). In short, according to this theory intentions (difficult but specific goals) are a potent motivating force in organisations.

Robbins et al (2009) reveal that another way in which staff members or employees motivate or de-motivate is comparison of their job inputs (efforts, academic credentials, and professional experience) and outcomes (salary band, recognition, and rewards) with those of the others and then they respond to eradicate any inequalities. People perceive what they get from a job situation in connection to what they put into it. Then they compare their outcome-input ratio with the ratios of relevant others. Figure 4 below reflects this. If people perceive that their ratio is equal to others relevant a state of equity occurs but if ratio is unequal (particularly low in comparison to others) then a state of equity tension starts. However, if people see themselves as under-rewarded, the tension creates anger, when over-rewarded, the tension creates guilt. This negative state of stress, anxiety or tension provides the motivation to do something to rectify this (Adams, 1965).

On the basis of this equity theory, when people in the organisations perceive inequity one of the following outcomes may occur (Walster et al, 1978; Greenberg,1989); people change their inputs or outcomes, distort perceptions about themselves or about others, or select a different referent or quit the job. However, any of these actions at the employee’s end indicates the motivation level of the employee.

Generally rather most widely acknowledged description of motivation is Vroom’s theory (Vroom, 1964). Figure 5 below describes the three relationships in connection to this theory. 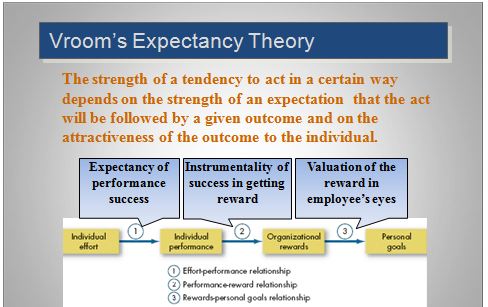 Expectancy theory reveals certain factors which demonstrate why most of the staff members are not motivated in their jobs and invest minimum energies just to accomplish the tasks. People think will their maximum effort be recognised in the appraisal of their performance, if performance appraisal is good will it result in getting organisational rewards, and if rewards are given then will they be attractive in the eye of the employee (Robbins et al, 2009). This means first of all to motivate the employees their good performance should also be evaluated and then the rewards should be those which are valued by the employee and can fulfil his or her wants.

From the discussion above it can be summarised that motivation is linked with the performance and a number of factors in the organisations are responsible for the motivation of the employees. Managers should not have stereotype behaviour and believe that the factors which motivate him or motivate one group of individuals will also motivate other individuals in the organisation. Moreover, motivation is more an intrinsic phenomenon and motivation strategies must fulfil the employee’s needs and wants. KPMG, a leading management consultancy firm rated among Big 4 in the world, offers every staff member and employee a personalised overview of his or her complete rewards package every year. This encompasses annual base salary, bonus and recognition rewards for the previous year. The firm also contributes toward the employee’s health, well-being and retirement benefits. The firm allows employees to select their perks and so people in the firm are not only satisfied but also the firm has been rated as the ‘Employer of Choice’ (KPMG, 2012).

However, literature reveals a variety of motivational strategies. For example, according to Robbins et al (2009) job redesigning can result into intrinsic motivation of the employees. Job redesigning can be done through job rotation, job enlargement or job enrichment. Job rotation can cause a training costs increase and productivity decrease, but it motivates the employees by diversifying the employee’s activities and intrinsically helps employees understand how their work contributes to the company. As a result employee development helps build talent in the organisation (Ortega, 2001). Job enrichment can help reduce absenteeism and as a result turnover costs are decreased. Overall satisfaction level increases. However, job enrichment works the best when it is used to compensate poor feedback and reward systems (Griffin, 1991; Cotton, 1993; Robbins et al, 2009 and Morgeson et al, 2006).

Another strategy is alternative work arrangements. Flexitime, job sharing and telecommuting are some examples of alternative work arrangements. Flexitime is effective in motivating the employees and enhances their productivity by reducing absenteeism, overtime expenses, hostility towards management and also eliminates tardiness. As a result autonomy and responsibility for employees increases and thus job satisfaction is increased (Dalton and Mesch, 1990; Kush and Stroh, 1994 and Golden, L. (2001). Similarly telecommuting increases productivity and decreases turnover but can affect teamwork spirit in the organisation (Stanton and Barnes-Farrell, 1996; Pappas, 1999; Armour, 2001 and Buss, 2001). Also for employees with high social needs (as discussed in Maslow’s needs hierarchy earlier) telecommuting may result into isolation and reduced job satisfaction (Robbins et al, 2009).

Robbins et al (2009) also reveal that employee involvement and engagement in decision making helps motivate them by enhancing their autonomy and control over their work and lives.

Moreover, another factor is considered more powerful than pay. Recognition is considered the most powerful workplace motivator (Caudron, 1995 and Nelson, 1996). Recognition programmes are not only effective in motivating employees but also incur less or no cost for the organisation (Stajkovic and Luthans, 2001; Luthans and Stajkovic, 2004).

However, it is important to understand the particulars which can indicate whether staff members or employees in an organisation are motivated or not. Only then can effectiveness of motivation strategies can be established.

This section deals with the description of research methods which were used and the rationale of using them.

Hart (2006) describes that one of the key targets of the literature review is to exhibit the capability of library searching, to demonstrate the control and command of the subject matter and exploration of the issue, and to rationalise the research topic under study along with the research design and methods.

It has been highlighted by Dubey (2009) that in order to fulfil the requirements of an analytical and investigative approach, statistics and evidence has to be extracted in the form of facts and figure. The data thus obtained is used to carry out a critical assessment and evaluation of the research issue (Marschan-Piekkari and Welch, 2004). As this study was an analytical study involving secondary research, the facts and figures of the data and information previously accessible were used.

Beg and Mirza (2010) advise that using primary sources to collect the data should be preferred as far as possible. This is because of reliability issues and errors in the secondary sources as described above. As this project aimed to gain information about a number of factors related to productivity and motivation from various employees in a specified time periods, a mailed questionnaire survey was the selected methodology for primary research.

· Advantages and Disadvantages of Survey Questionnaires – It is a cheap and quick method of research. Informants can fill in the information at their convenience and do not hesitate to reveal even some confidential facts which they might hide in a face-to-face interview. The disadvantage is that the informants sometimes do not respond to these questionnaires or give incomplete information or full of errors (Beg and Mirza, 2010).

According to Beg and Mirza (2010) data may be available from various primary and secondary sources but the all of them may not provide the full information required to answer the research question. It has been further suggested that data from one source might be easy to obtain and may be cost-effective but its reliability might not be confirmed. To overcome such issues Powell and Steele (1996) suggest combining various data collection methods and data sources to help increase reliability of the data for the stakeholders.

The current research also combined the primary and secondary data sources to reveal different aspects of the research question.

The research methodology adapted for this study was based on both primary and secondary research as depicted in Figure 6 below; The literature reveals that privacy and informed consent, access and acceptance and misrepresentation of the information are related to secondary research primarily involving Internet based data (Denzin and Lincoln, 2005; Yulirahmawati, 2008) which were addressed by frequent meetings with the mentor.

The limitations of the study were time and resources constrains. To overcome these constraints a mailed questionnaire survey and a comprehensive secondary research were used to generate data.

Some elements such as sociability and solidarity issues in relation to research area could not be investigated because of time constraints leaving this area vacant for future research.

About me:
I am currently working as an Internal Auditor in Tafsfood Ltd which is a franchisee of KFC. I recently finished my BSc in Applied Accounting from Oxford Brookes University. I am also a fully qualified ACCA. I have a strong back ground in Accounting and Finance backed by my ACCA qualification. I am a motivated, adaptable and responsible individual with a logical and methodical approach to achieving tasks and objectives. I had been awarded with Employee of the year at my current work place. I have always enjoyed jobs involving research and analysis which enabled me to complete a major project at my work place. Now I am planning to start studying towards CFA.