Introduction
Serum protein electrophoresis (SPEP) is a process of separating serum proteins according to molecular size and charge, by placing a sample of serum onto agarose gel and applying an electric current. The resulting bands allow classification of serum protein into five different groups: albumin, α1-globulins, α2-globulins, β-globulins and γ-globulins (see figure 1). By analysing the size of each band it is possible to identify elevated or reduced levels of a particular protein, which may be indicative of a disease state.

For example, the α1-zone consists primarily of α1-antitrypsin, a protease inhibitor. Absence of this band would indicate α1-antitrypsin deficiency, which leads to cirrhosis and emphysema due to unchecked neutrophilic elastase activity in the liver and lungs (Coakley et al., 2003).

However, because of the diverse range of proteins present within each band, quantitative estimations of an individual protein are often more difficult to achieve. Therefore, the clinical utility of SPEP is limited when assessing abnormalities in the levels of individual proteins.

Role of SPEP
The primary use for SPEP in modern clinical medicine is in the detection of abnormalities in the γ-zone, which is almost exclusively formed of immunoglobulins (Igs). An increase in this band typically reflects an increase in Igs and may be seen in infection, liver disease and connective tissue disorders, such as rheumatoid arthritis. These conditions usually form a broad, diffuse band composed of a variety of Igs (polyclonal), which reflects low disease specificity. However, of far greater importance is a dense, narrow band which represents monoclonal paraprotein production as part of a neoplastic process (see figure 2).

As such SPEP is most useful from a clinical perspective when a malignancy is suspected, such as multiple myeloma or Waldenstrom’s macroglobulinaemia. In these diseases a monoclonal protein band (M band or paraprotein) is produced, due to dysregulated clonal expansion of B cells, resulting in a large band in the γ-globulin zone. SPEP reveals a distinct band of monoclonal protein in 80% of patients with multiple myeloma (Caers et al., 2008). The remaining 20% either have demonstrable hypogammaglobulinaemia or an apparently normal SPEP.

Figure 2. Schematic representation of a monoclonal band in the gamma region of a serum electrophoretogram (O’Connell et al., 2005).

Another important cause of a paraprotein on SPEP is Waldenstrom’s macroglobulinaemia. This is a neoplastic disease of bone marrow, characterised by an IgM paraprotein on SPEP and a corresponding decrease in other Igs subtypes (Fonseca and Hayman, 2007). Immuno-fixation techniques are required in order to ascertain that the paraprotein is of the IgM class.

An important differential diagnosis when presented with a paraprotein band is monoclonal gammopathy of undetermined significance (MGUS). MGUS is common in the elderly: 4.6% of 70-79-year-olds and 6.6% of people over 80-year-olds demonstrate asymptomatic MGUS (Kyle et al., 2006). Therefore, it is of clinical importance to be able to differentiate a healthy anomaly from a malignant state. One indicator is that the band is typically less than 3g/dL in MGUS, although this is by no means definitive (George and Sadovsky, 1999). It is worth noting that MGUS may reflect an underlying disease such as lymphoma or a connective tissue disorder and therefore further investigations may be warranted, particularly as there is 0.6-3.0% annual risk of progression to malignant multiple myeloma (Kyle et al., 2002).

In order to identify a malignant process with some certainty and exclude polyclonal gammopathy and MGUS, it may be necessary to perform further investigations. Urine protein electrophoresis (UPEP) and immuno-fixation electrophoresis (IFE) are two techniques which have increased sensitivity over SPEP and may help contribute to the diagnosis of malignancy.

Diagnostic adjuncts
UPEP is used to detect Bence-Jones protein (BJP), which is a Kappa or Lambda light chain found dissociated from the regular Ig conformation (see figure 3). The light chains are sufficiently small that they can be excreted by the kidneys once they reach a sufficient concentration in the blood. In 15% of multiple myeloma cases the only identifiable monoclonal product is BJP, thus UPEP is an important investigation for multiple myeloma as well as for AL-amyloidosis, in which the pathogenic marker is always urinary light chains (Beetham et al., 2007; Merlini and Bellotti, 2003).

A monoclonal light chain is found in 75% of UPEP samples in patients with multiple myeloma and when combined with SPEP there is an overall detection rate of 99% (Fischbach, 2004). However, the most sensitive way of identifying light chains is using IFE. Antibodies recognising specific epitopes on the light chains are added to the urine or serum electrophoresis gel allowing for identification of BJP, enhancing detection by 10-fold compared to standard SPEP (Beetham et al., 2000).

These methods are not without their limitations. Combining SPEP and IFE is a labour intensive process and may produce results which are difficult to interpret. Also, BJP levels have to be quite high in the blood before they are excreted by the kidneys, limiting the sensitivity of the method. One also has to consider the renal function of the patient when interpreting levels of excreted BJP, as this may mar attempts to assess disease progression or treatment efficacy (Graziani et al., 2003; Beetham et al., 2007). 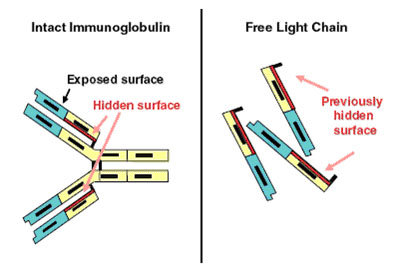 More recently, a technique known as serum free light chain analysis has been developed (2000) which uses antibodies that recognise very specific epitopes on Kappa and Lambda light chains which are normally concealed when part of a complete Ig molecule (figure 3). This would eliminate the detection of whole Igs, as occurs in other assays, and would provide a direct quantitative value for light chains only. Data is still being collected as to whether or not FLC analysis adds to the diagnostic value of other tests, or may replace them altogether (Beetham et al., 2007).

Conclusion
SPEP is a laboratory technique used primarily to detect hypergammaglobulinaemia. Most significantly, paraprotein detection is indicative of several neoplastic conditions and must be differentiated from MGUS. UPEP can also be used to detect urinary BJP, which is a potent marker of a neoplastic process. Combining either of these studies with an immuno-fixation assay provides the most sensitive method of detection.