Explain in detail the problem facing the deployment of MIPv6 in the future wireless Internet and how HMIPv6 can tackle these problems by providing fast handover support.

The next generation of mobile/wireless networks are expected to be all IP based, relying exclusively on IP, from mobile station to the gateway towards the Internet. IP was not designed with mobility in mind. However, in the future all-IP based wireless networks are expected to provide service continuity while moving through different heterogeneous wireless systems (e.g 3G and WLANs). To address the issue of mobility at IP layer, IETF has proposed Mobile IPv4 [1] and Mobile IPv6 [2]. The focus is on Mobile IPv6 as it will be the basis of all future IP networks.

With Mobile IPv6 (MIPv6), each time a mobile node (MN) moves from one subnet to another, it gets a new address called care-of-address (CoA). The association between the permanent home address (HoA) and the CoA is known as a binding and the MN registers it with the home agent (HA) using binding update (BU) messages (association of addresses plus the association lifetime). The HA records this binding in its binding cache and intercepts any packets addressed to the MNs home address and tunnels them to MNs CoA. In MIPv6, HAs no longer exclusively deal with the address mapping, but each correspondent node (CN) can have its own binding cache where a binding update is stored. This enables route optimisation compared to triangular routing via the HA and the CN can directly send packets to the MN [2]. These BU’s are sent every time a MN changes its point of attachment to the Internet. Even if the MN doesn’t change its point of attachment, BUs are sent periodically as they have an associated lifetime.

It is a well-known observation that MNs moving frequently as well as far away from their respective home domain or CNs produce significant BU signaling traffic. As per one of the studies [3], 69 % of user mobility is within its home site (within its building or campus). The problem with standard MIPv6 is that it handles local as well as global mobility identically irrespective of the user mobility pattern [4]. This approach is not scalable since the generated signaling load can become quite overwhelming as the number of MN increase in the Internet. Secondly, when a MN changes its point of attachment, it cannot receive IP packets at its new point of attachment until the handover ends. This time includes the new prefix discovery on the new subnet, the new CoA establishment and the time needed to send BU messages. This time is called handover/handoff latency [5] and can be too long for real time applications (e.g VoIP). So we have two problems; one of high signaling traffic and the other of handover latency and consequently packet losses.

Hierarchical Mobile IPv6 (HMIPv6) is an extension to MIPv6 to support the micromobility approach. It aims to reduce the signaling load due to user mobility inside a local domain. These domains are independent from subnets and are generally managed by a unique administrative authority (e.g a campus). Each domain is connected to the rest of Internet by a Mobility Anchor Point (MAP). The MAP is an Access Router (AR) with a publicly routable IP address at the top of several ARs (figure 2). The whole concept of HMIPv6 is based on bringing the functionality of HA to this MAP. The MAP basically acts as a local HA. 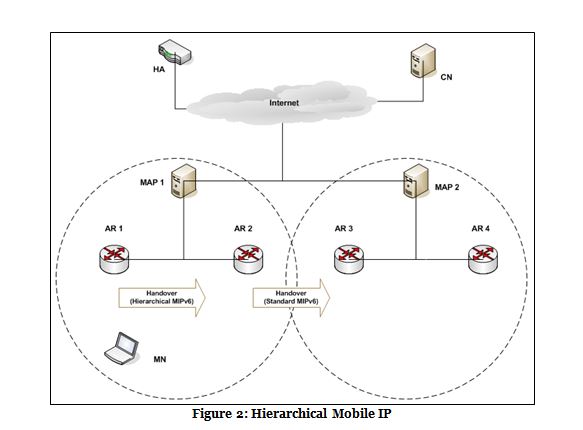 When a MN enters into a new MAP domain, it gets two CoAs; a Regional care-of-address (RCoA) which is the address on MAP’s subnet and an on-link care-of-address (LCoA) which is the address of the link it is attached [8]. The RCoA is the address that MN will use to inform it’s HA and CNs about its current location. The MAP will receive all the packets on behalf of the MN and tunnels them directly to the MNs LCoA. The MN then sends two BUs; a BU specifying its binding between home address and LCoA to the MAP and a BU specifying its binding between RCoA and home address to the HA and CNs. Therefore when a CN sends packets to the MN using RCoA, they are routed to the visited network, intercepted by the MAP and tunneled to the MN. If a local CN sends packets to the MN, it uses LCoA, as a result packets are directly delivered to the MN. When a MN moves within a domain, it gets a new LCoA on its new point of attachment. The RCoA remains same as long as the MN is roaming locally. It sends a BU to the MAP specifying its binding between the home address and new LCoA. In this case, however no BU is sent to the HA or the CN across the Internet.

Therefore HMIPv6 provides a mechanism to reduce the signaling load in case of handoffs within the same domain and improves handoff performance by reducing handoff latency and packet losses since intra domain handoffs are performed locally [9]. It should be noted that HMIPv6 doesn’t imply any change to the periodic BUs a MN has to send to HA and CNs, therefore the performance gain depends on the mobility of the nodes.

Another protocol providing extension to MIPv6 to tackle the problem of service degradation that a MN experiences while changing its point of attachment, is Fast Handovers for Mobile IPv6 (FMIPv6) [10], which was actually proposed before HMIPv6. It uses Layer 2 (L2) triggers to optimise the MN movement by two methods: anticipated handover and tunnel-based handover. The whole concept is to redirect the MN’s traffic to its new location before it moves there.

It should be noted here that HMIPv6 itself doesn’t provide ‘fast handovers’. The primary objective of HMIPv6 was to reduce the signaling to the HA and CN in case of change in point of attachment. This improves handover performance. FMIPv6 was designed explicitly for the issue of service degradation during handovers. A better approach would be to have a hybrid technique based on both of these protocols. In [9] authors have proposed a solution based on combining FMIPv6 and HMIPv6 to add up the advantages, and providing additional improvements.

All the above mentioned protocols are host based as they require host software stack changes for global mobility management. A new area of research is Network Based Localized Mobility Management (NetLMM) currently being standardised by IETF. Proxy Mobile IPv6 (PMIPv6) is the most representative effort on the way towards next generation all-IP networks [11].

About me:
I hold an M.Sc in Mobile and Personal Communications from King's College London and am currently studying towards a Ph.D in Telecommunication Engineering. I have published several papers in peer reviewed IEEE conferences and journals. I have also supervised a number of bachelors and masters level research projects. I have professional experience of working with different mobile operators and hold a Bachelors degree in Electrical Engineering. Programming Languages and Engineering Software: C++, MATLAB, Simulink, Network Simulator, Opnet, PSPICE, etc.