Voice over Internet Protocol (VoIP) is a recent innovation in the growth of IT and is playing an increasingly important role in institutes and organisations globally. The main reason for having a VoIP system is to facilitate interaction by making calls through a broadband Internet connection rather than by using the traditional land lines. In addition, VoIP promises to increase the availability for individual users generally and business users particularly and decrease the cost of communication (Butcher, Li and Guo, 2007).

The architecture of VoIP is actually very basic and includes endpoints such as telephones and PCs, control nodes, gateway nodes and the IP network. The physical connections for the IP network channel can be ethernet, fibre and wireless. The interoperability of VoIP can be exploited by interacting with both local and remote VoIP phones. This feature can be utilised by using internet and intranet connections (Butcher, Li and Guo, 2007).

VoIP systems are also interoperable with the Public-Switched Telephone Network (PSTN). This implies that VoIP digital phones, whether local or remote, are able to interact with analogue phones (Butcher, Li and Guo, 2007).

Integrating telecommunication and data-communication networks into one network is one of the main reasons that VoIP is vital. It implies that transmitting phone calls and transferring data will be processed by a single network (Leppänen).

VoIP stands for ‘Voice over Internet Protocol’ and allows the voice to be conveyed over an IP network such as LAN network and WAN (internet) network in order to establish a connection. In other words, VoIP technology differs from the traditional public-switched telephone network (PSTN) in terms of how voices are transmitted. In the traditional technology, the voice is transferred over the traditional lines with specific characteristics. VoIP has many features that can convince the customers to enjoy and introduce this technology, one of which is that it costs less. However, voice quality over VoIP is poorer than over a PSTN network (Leppänen).

As the Internet has become increasingly popular, widely available and easy to use, VoIP is becoming a useful tool and is being utilised in more and more organisations. There are several ways available for users to connect to VoIP. These connections can be established between PCs and telephones through the internet according to the following topologies: PC to PC; PC to telephone; telephone to PC; and telephone to telephone (Leppänen).

Since VoIP applications are real-time and VoIP is a very sensitive system, this system will not tolerate any kind of error in voice applications such as packet delays, packet losses, out of order packets and jitter. These impairments will affect VoIP quality, particularly during transmission of voices (Mehta and Udani, 2001).

VoIP protocols are the most important part of the infrastructure of VoIP for building it up. VoIP has various protocols and each protocol has a diverse role. These protocols are mentioned in order of importance as follows: Signalling System 7 (SS7); H.323; Session Initiation Protocol (SIP); Real Time Protocol (RTP); and Real Time Control Protocol (RTCP). In addition, gateways and gatekeepers are involved in all of these protocols and are responsible for operating and managing them in the right position. Since the main purpose of VoIP is to transfer voices, signalling is an essential element in telecommunications for setting up and terminating calls (Liu and Mouchtaris, 2000).

SS7 is the protocol used at the beginning of the VoIP operation. It facilitates the connection with third party calls and begins operating when the user dials a telephone number. The aim of signalling is to determine the availability status of the destination line (Mehta and Udani, 2001).

SS7 has various functions such as setting up the call, tearing down the call and reconciling the connection between VoIP systems and PSTN networks. A fact that shows the importance of SS7 is that, in North America, SS7 was recently utilised to set up and teardown calls (Mehta and Udani, 2001).

The H.323 protocol has been approved by the International Telecommunication Union-Telecommunication (ITU-T). H.323 has a set of protocols, as follows: Q.931; H.225; H.245; and ASN.1. These protocols are specialised and responsible for real-time applications such as audio communication, video communication and data conferencing between two terminals over a packet-switched network. It does not guarantee a robust quality of service (QoS) (Mehta and Udani, 2001).

In H.323 network infrastructure, three categories are constituted to establish the packet-switched network. These three categories in the H.323 infrastructure are the gateway, gatekeeper and multipoint control units (MCUs). It is possible to connect at least two endpoints without using MCUs, but not more than two endpoints (Mehta and Udani, 2001).

Figure 1 depicts the infrastructure and basic functionality of the H.323 protocol to set up a call. First, it illustrates that the source IP phone tries to connect to the gatekeeper in order to set up the call. Secondly, from the side of the gatekeeper, it tries to contact the destination IP phone. A gateway can be deployed instead of a gatekeeper to expand the connection between the terminals and to contact the outside endpoints. Finally, after the source and the destination IP phones have been connected through the gatekeeper, they can communicate directly whether there is a gatekeeper or not (Dressler, 2002, p.57). 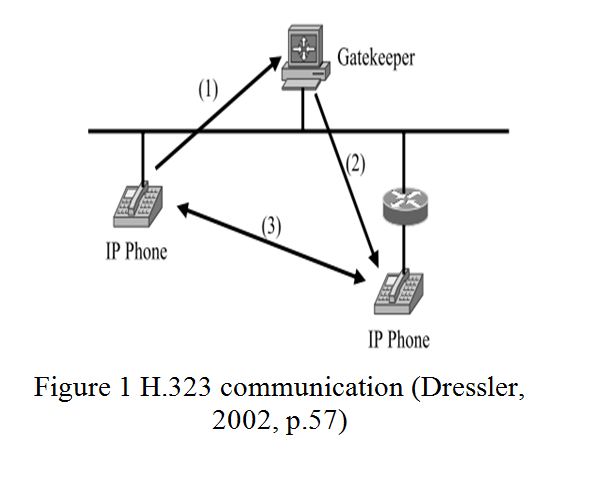 Session Initiation Protocol (SIP) is ratified by the Internet Engineering Task Force (IETF). The major tasks of the SIP protocol are to connect the telephone calls over the IP networks, instant messaging (IM) and video conferencing. However, its operation is totally different from H.323. SIP is particularly responsible for the internet use.

Several services can be managed by the SIP protocol such as creating, modifying and terminating sessions with one or more subscriber (Mehta and Udani, 2001).

In addition, SIP protocols provide various benefits which can support the establishment and the termination of multimedia communications. These benefits include determining user locations, user capabilities, user availability, and call setup and termination. The differences between SS7, H.323 and SIP protocols are concluded. Calls initiated in the PSTN network are supported by the SS7 protocol, while calls initiated in the IP networks are supported by the H.323/SIP protocols (Mehta and Udani, 2001).

However, the original signal that comes from the source is an analogue signal. The VoIP system has the potential to digitise this message to an appropriate signal for the system. The digitising process involves both signalling and encoding procedures and the Real-Time Transport Protocol (RTP) and Real-Time Transport Control Protocol (RTCP) begin to be utilised. The main purpose of both RTP and RTCP is to help transfer the converted signal to ‘voice packets’. This can also be done by the support of User Datagram Protocol (UDP) which is responsible for incurring voice packets and delivering them to the destination (Nguyen et al., 2001). RTP involves many services such as numbering successive data and guaranteeing data delivery (Mehta and Udani, 2001).

VoIP has many useful applications which many institutions are using widely. Its flexibility and availability when needed are important. These applications are commonly used in both small institutions and large organizations and include speech recognition, unified messaging (UM), display of the dialler’s number, call centre and video conferencing (Dressler, 2002).

UM and the call centre are the two most important applications which can be utilised on VoIP cloud. First, the call centre has two links in operation; one for voice information transmission and the other link is for data information transmission. The call centre receives all the incoming calls from the customers by using the voice link and then it retrieves the customers’ information from the database by using the data link. Secondly, UM is an advanced tool that can be used at a higher level in institutions. Different forms of messaging such as voice, e-mail and fax can be offered to VoIP users from UM applications at a single link (Nguyen et al., 2001).

5. The history of VoIP and the companies implementing VoIP

VoIP has developed rapidly and become an important tool for organisations. Consequently, many companies have adopted the VoIP paradigm as a product to sell. Due to feedback received about its good reputation, there is a great deal of competition in the market. Furthermore, this technology is global and can be sold in different parts of the world. The first company to develop voice transmission between two PCs through the IP network was Vocal-tec(Leppänen).

Later, many companies entered the fray of VoIP technology and started offering the service. These include companies such as Microsoft’s Netmeeting, 3Com, Cisco, Intel, Net2Phone. All of these companies have their own solutions and implement VoIP technology differently (Leppänen). Figure 2 indicates the physical view of the VoIP infrastructure inside a single cloud of a local area network (Dressler, 2002, p.57). 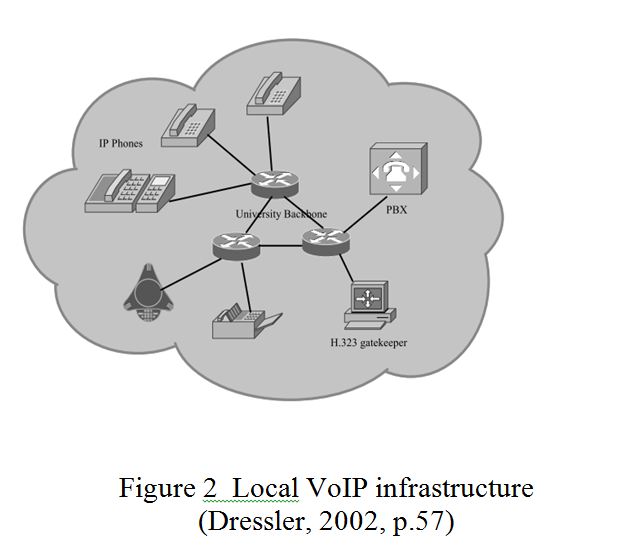 While VoIP technology is the most powerful technology nowadays, there are many challenges and diverse influences that can affect VoIP systems. Despite this, VoIP still maintians its strengths and availability against other systems such as analogue systems (PSTN). Technologically, VoIP is constructed around a robust base and is supported by reliable companies. Latency, security, firewall interoperability, network outages, eavesdropping and quality of service (QoS) are factors which can affect the reputation, the reliability and the quality of VoIP (Butcher, Li and Guo, 2007; Jiang and Schulzrinne, 2003; Mehta and Udani, 2001; Leppänen). These features will be discussed:

First, latency has to do with time delays particularly in speech delay over the IP telephone system (Mehta and Udani, 2001).

Second, security issues warrant much debate and discussion. The internet gives every user the opportunity to transmit and receive data, whether voice or information, from all over the world. One of the most important factors, that can be regarded to be under the umbrella of security issues, is the eavesdropping of calls in the IP network. In contrast, eavesdropping of calls in the PSTN network is much more difficult (Butcher, Li and Guo, 2007; Leppänen ).

Third, the firewall is one type of the protection and is used to protect packets from being spied on or destroyed. In addition, this kind of protection is interoperable with VoIP components such as H.323. Firewalls can collaborate with each other in order to manage and control the calls that are being transmitted or received through the IP network (Leppänen).

Fourth, outage is a disadvantage that really leverages the quality and the efficiency of any electronic system. Accordingly, the more outages the system faces, the less will be its availability and performance (Jiang and Schulzrinne, 2003).

Lastly, quality of service (QoS) assesses the system’s reliability and effectiveness especially from the consumers’ point of view. Customers require three aspects of quality from VoIP: high reliability, high performance of the conveyed voice and the quality of voice compared to the PSTN network (Leppänen). In short, VoIP QoS requires multiple features such as dedicated bandwidth, evolving loss attributes, controlling network collision and avoiding out of order packets (Mehta and Udani, 2001).

VoIP is the most powerful technology nowadays and can be considered to be highly valuable to organisations. This can be confirmed by the fact that no organisations or other institutes have disregarded this technology. Even in the worst cases they can deploy the original idea of VoIP which is a PSTN network. Moreover, VoIP can be run simultaneously with any customized data network which leads to reduced cost, maintenance and implementation.

About me:
I am a full-time PhD student, reading for a degree in computer science and information systems. I am a member of a research group and am currently working on a project from the FP7 programme. My master's degree, which was awarded by a university in the UK, had as its core modules networking and data communications. Before continuing my education, I spent several months working in the industry in areas closely related to my field of studies.