The Impact of Olives and Agriculture Factors in Early Bronze Age Mediterranean.

Agriculture, olives, and wine are core factors in understanding the past as they are integral to the social changes initiated through transitions in settlements, landscape, and human productivity during the Bronze Age. The transitions from Lithic ages to the Bronze Age are due to an array of human, ecological, agricultural, and innovative factors that interlink, inducing irreversible changes in human society and interactions. Population growth, intensity in agriculture, innovative agricultural methods, ecological factors such as the flooding of deforested grounds, crop selection, settlement formations are just a few factors that are involved in the overwhelming changes (Johnson, 1996; Nesbitt, 1995; Hamilakis, 1996; Fairbairn, 2005).

Some agricultural products were key instruments in creating a turning point in social development during the Bronze Age. Olives are one of those key commodities and their cultivation is perceived as being a huge driving force for economic changes around the Mediterranean. In the past, most research work and argument was dominated by the typical ‘Mediterranean Triad’ phenomena of olives, cereals, and wine, being the main ingredients for stability in the agricultural scene during the beginning of the Bronze Age (Renfrew, 1972; Hamilakis, 1996; Foxhall, 2007). Renfrew (1972) argued that new technologies of cultivation of olives and wine were the determinants of socio-political transformations in the Early Bronze Age.

The Bronze Age was highlighted by an increase in trade in the Mediterranean; for example, between Cyprus and Egypt. Between 1600-1300 BC, not only was copper an important trade commodity, but other products such as food (barley and grain), wine and resins, horses and oxen, textiles, oils (vegetable and olive), and aromatic oils (Knapp, 1992).

This essay demonstrates, through various case studies, that even though there were other factors significantly affecting social and economical advances, the cultivation of olives and the production of olive oil remained one of the most influential and perhaps crucial determinants of economic liberation and power. Hamilakis (1996) suggests that on Crete crops were not just important for nutrition, but they were instruments of power too. Hamilakis (1996) describes the social strategies of the social elite consolidating and legitimising power through labour exploitation as well as competing with rival elites.

Olive Cultivation in the Mediterranean
The olive tree (Olea europaea L) is a very symbolic tree of the Mediterranean, signifying peace, harmony, strength and it has been pivotal in the societies of the Mediterranean over the past five to six millennia. Archaeological studies for olives, olive cultivations, olive oil production and trade during the early Bronze Age are very few, particularly where the Greek Islands are concerned (Knapp, 1992, Hadjisavvas 1992). Evidence of oil production comes from an early Bronze Age site at Tel Yarmouth, Israel (Salavert, 2008). The production of olives was very important for the local community. Crushed olive stones and an oil extracting area are evidence of olive production in Tel Yarmouth (Salavert, 2008).

Generally, the cultivation of olives is thought to have emerged during the Chalcolithic period (pre-bronze age; Zohary and Hopf, 2000, Salavert, 2008). Tel Yarmouth, after the early bronze period, went through a transition from being a unfortified village (3500-3100BC), a fortified urban centre in the middle Bronze Age (3100-2700BC), to the ‘golden age’ of Tel Yarmouth (the start of the middle Bronze Age III: 2700-2300BC) which was contemporary with the Old Kingdom in Egypt and the Sumerian Dynasties of Mesopotamia (Salavert, 2008). An increase in aridity around 2500BC would have had an impact on olive cultivation which may have caused the abandonment of the Tel Yarmouth settlement (Salavert, 2008).

The political and economic stabilities of the region were important in maintenance of olive groves and inter-regional and international trade (Salavert, 2008). Salavert, 2008, shows that cultivation of olives was very well controlled in the Levant and argues that it held a vital role in the local economies.

Because olives were a valuable commodity, they were prized by the elite. Documentary evidence relates that in Crete during the Bronze Age, olive oil was used in the palaces for ritual purposes, festivals, perfumes and personal use (Hamilakis, 1996). In addition, it may have been given to palace officials and elite as salary or just for personal usage, and subsequently may have been given as gifts or used in transactions (Hamilakis, 1996). 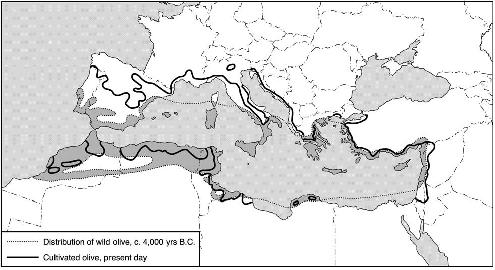 There is a lack of olive oil production archaeological evidence of the early Bronze Age, but there is very significant evidence of olive oil production in the middle Bronze Age (Runnels and Hansen, 1986; Salavert, 2008). There is no evidence of olive pits on the west coast of Cyprus during the Early or Middle Bronze Age (Hadjisavvas, 1992). This is because archaeological studies of these periods tend to concentrate on excavations of cemeteries (Hadjisavvas, 1992). Currently, it is difficult to determine accurately the moment in the archaeological record for the ‘domestication’ of olives as it is difficult to distinguish cultivated olives from wild olives through the morphology of olive stones (Runnels and Hansen, 1986; Foxhall, 2007).

One reason for the lack of evidence is that olives are a perennial fruit, so require long term investment (Hamilakis, 1996; Grigg, 2001). The lack of evidence of olive oil production during the early Bronze Age periods may be for the reason that it was not economically feasible for them to cultivate a valuable fruit in large quantities. As the trade of secondary products grew and generated economical power, olive oil was produced on a larger scale.

Another factor perhaps may have been that cultivated olives contain more fat than wild olives and they are unsuitable for the production of perfumes. The majority of olive oil for perfumes was produced from wild olives, a ratio of 7:2 (Runnels and Hansen, 1986, Hamilakis, 1996). Hence, there would obviously have been small scale production of oil to meet the daily needs of the palace elite. Small scale oil processing would be archaeologically undetectable (Foxhall, 2007). A batch of wild olives would be purposefully collected and reserved for olive oil production. It is evident from findings at Kfar Samir, Greece, that basic techniques of processing olives for oil were known and employed even during the late Neolithic period (Foxhall, 2007).

As the amount of wild olives was limited, they would be more rare and expensive. Perfumes and products would be scarce and production of valuable trading commodities would be favoured over every day products. Figure 1 shows the spread of wild olives through the Mediterranean coasts in 4000BC. It can clearly be seen that since olives were a prized commodity in the ancient world, the social and economical advantages that olives would emanate throughout the Mediterranean basin over the ‘non-olive’ growing areas of the ancient world. Undoubtedly this would be a very powerful and economic trading tool.

Agriculture Advances of the Neolithic Period through to Early Bronze Age
Studies of the agro-botanic in Southern Turkey have shown that about 10,000 years ago the hunter-gather approach was very much the norm; collecting and foraging seeds of wild plants such as wild barley, peas, lentils, and wild emmer wheat (Nesbitt, 1995). During the early Bronze Age (about 3000 BC), emmer wheat abruptly disappears from archaeological records in Southern Turkey (Nesbitt, 1995). Emmer wheat is important as it is fungal resistant (lasts longer, better to store), and is good quality, hence valuable as chicken feed. The appearance of fruit such as grapes and figs was timely, with changes in settlement patterns and economies in the Near East (Nesbitt, 1995).

During the early Bronze Age, there was a significant shift from small villages to a more hierarchical system of villages (Nesbitt, 1995; Fairbairn, 2005). Some suggest that growing populations led to a shift in the way crops were produced (Nesbitt, 1995). Improved manure production, the advent of the plough, animal labour in the fields, and intensification of animal husbandry were important factors in period changes.

Shifts from the type of water that was used in agricultural systems is evident both from archaeological studies in Turkey and Greece. At the advent of the Bronze Age there was a reduction in open aired settlements in Thessaly, Greece (Johnson, 1996). In southern Greece, there were settlement dispersals to higher grounds and the increased utilisation of dried soil (Johnson, 1996). There was a shift from using spring water to rain water (flood water) made possible by the use of the plough (Johnson, 1996). This was the case in both Greece and the Ҫatalhöyük area of Turkey (Johnson 1996; Fairbairn, 2005).

Using intensive floodwater led to more intensive farming using the plough (Fairbairn, 2005). The plough enabled ground to be cultivated more effectively and faster, leading to a reduction in the reliance on human labour, and larger lands being cultivated. This undoubtedly contributed to higher crop yields and better compensation of crops on marginal drier soil (Johnson, 1996; Fairbairn, 2005). Agricultural practice played a large part in the social politics of Ҫatalhöyük, and most probably other Neolithic settlements, that changed with changes in agricultural practices (Fairbairn, 2005).

Population growths also prompted the need to agriculturally diversify, and induced necessary changes in human diet. On the Island of Rhodes, settlements tended to be concentrated on plains that were highly fertile, such as the north western coast during the early Bronze Age (Knapp, 1992). This emphasises the fact that agriculture was key in determining human habitations. On Sardinia, during what Knapp (1992) describes as a transition from non-permanent pastoral camps to permanent, autonomous, tribally organised agro-pastoral camps (2000-1200 BC). Trading and agriculture were important in determining the locations of human settlements and this also reflected in the stability of the societies, hierarchical systems, cultures, and progressive outlooks (economically through trade, and politically through social organisations) (Knapp, 1992).

Overview
From the above brief descriptions of olive and agricultural case studies, it can be ascertained that transformations from Neolithic to Bronze ages were not as a result of just one single factor, but a whole array of factors, through time, ecological changes, human settlement changes, and technological and material discoveries.

The olive tree thrives in Mediterranean climates and under well drained soils. Ancient settlers of the Mediterranean selectively and through the millennia have developed an excellent commodity that gave them economical, social, and political power. More utilisation of dried soils in Greece and Anatolia, increased selection of wild olive cultivars, as well as long-term agricultural and economic investment of olives are key elements in the progression of the Bronze Age. Undoubtedly, solid archaeological evidence is very sporadic in this area. A more comprehensive and unified scientific approach is required as well as the use of new technologies such as DNA identification.