An investigation into the potential of Geobacter sulfurreducens to encode transglutaminase and its potential for industry.

Abstract
Transglutaminase is a cross-linking enzyme that links proteins to form a covalent bond resistant to proteolytic degradation. In 2009, Janet B. Rollefson found a gene encoding for a putative transglutaminase in Geobacter sulfurreducens, where it was found to be critical for biofilm formation on electrodes in microbial fuel cells. If this enzyme is a transglutaminase, it will be a novel transglutaminase that could be patented, commercialised and marketed. It could be used to replace existing transglutaminases in various applications in the food, medicine, cosmetic and textile industries. It could potentially have other beneficial properties, such as improved activity, altered substrate specificity and/or stability. Investigation of the nature of this enzyme will also be important for optimisation of the growth of G. sulfurreducens in microbial fuel cells. We carried out this study to investigate the potential of this organism as an alternative source of transglutaminase.
Using suitable primers, we amplified this putative transglutaminase gene encoding for both mature and signal peptides containing protein. Thermal cycling conditions were optimised for maximum amplification yield and specificity. We subcloned this into pET21d vector since it has unique restriction sites of Nhe1 and Xho1 and also carries a His tag sequence that simplifies the purification of our ‘TG’ protein. The digested products were ligated together and transformed into BL21(D3) competent E. coli cells. Transformed cells were inducted with 1mM IPTG for 3 hours at 37°C. Analysis of SDS-PAGE revealed the induced protein of the expected size (52 kDa) in Clone3. This clone was harvested, lysed by sonication and cell debris removed by centrifugation. The lysate was applied to a 1 ml His-Bind column. The putative transglutaminase protein was eluted in a linear gradient using imidazole, at a flow rate of 1 ml/min and fractions were collected into a 96 well plate. SDS-PAGE gel electrophoresis of the fraction collected during IMAC purification showed expected bands affirming the presence of a 52kDa protein. Samples were then purified using PD-10 Desalting columns (GE Healthcare) Gravity protocol. Protein samples were collected, marking the end of the expression and purification of the recombinant protein.
Characterisation of this putative transglutaminase was carried out using biochemical assays for transglutaminase. In order to quantify our protein, we carried out the Lowry protein assay using Bio-Rad Dc Protein Assay Reagent A and Reagent B in a 96 well plate. A standard curve of absorbance at 750nm against protein concentration was plotted and the protein concentration in our purified protein samples was found to be 1mg/ml. Transglutaminase assay carried out using 50mM Tris-HCl, 0.25mM biotin cadaverine, 10mM DTT, 20mM CaCl2 and absorbance was read at 490nm. Using mTG as a positive control it was observed that our recombinant protein does not show transglutaminase activity.
Microbial transglutaminase has broad substrate reactivity and is known to cross-link casein to form high molecular weight products. No casein cross-linking was observed using our sample‘TG’ with increasing time whereas microbial transglutaminase cross-links casein, thus showing negative transglutaminase activity.
Thus, Geobacter sulfurreducens does not encode a transglutaminase.

Introduction
Transglutaminase is an enzyme that has commercial importance. Interest in this enzyme is increasing as it has various applications. It is a cross-linking enzyme that links proteins to form a covalent bond resistant to proteolytic degradation. A gene encoding for a putative transglutaminase has been found in Geobacter sulfurreducens(Janet B. Rollefson, 2009). In this research project, we investigate this putative transglutaminase from Geobacter sulfurreducens. If this enzyme is a transglutaminase (as proposed) it will be a novel transglutaminase that could be patented, commercialised and marketed. It could be used to replace mammalian transglutaminase in various existing applications in the food, medicine, cosmetic and textile industries. It could potentially have other beneficial properties, such as improved activity, altered substrate specificity and/or stability. An enzyme from this source could be more thermostable and also increase the rate of reaction. Investigation of the nature of this enzyme will also be important for optimisation of the growth of G. sulfurreducens in microbial fuel cells. The potential of this organism as an alternative source of transglutaminase motivated this study.

Since then the interest in this novel enzyme has been increasing. The major applications of transglutaminase will be discussed further in this literature review.

Transglutaminases are known as nature’s biological glues and industry’s biocatalysts. The enzyme’s function is to catalyse a strong covalent bond that is highly resistant to proteolytic degradation. The bond is formed between a free amine group (peptide bound lysine or protein) and the gamma carboxamid group of a protein or peptide bound glutamine. Transglutaminases are involved in the post- translation modification of proteins through acyl transfer reactions where peptidyl glutamine residues are the acyl donors and primary amines act as acyl acceptors. (Martin Griffin, 2002; Schleehauf, 2001). ‘Transglutaminases seem to react best with glutamine residues in unstructured flexible regions of proteins, often in the N and C terminal domains, but always in end positions’ (Kapil Mehta, 2005). In-vivo transglutaminase is said to be involved in cell proliferation, cell migration, wound healing apoptosis, ECM reorganization, receptor-mediated endocytosis. 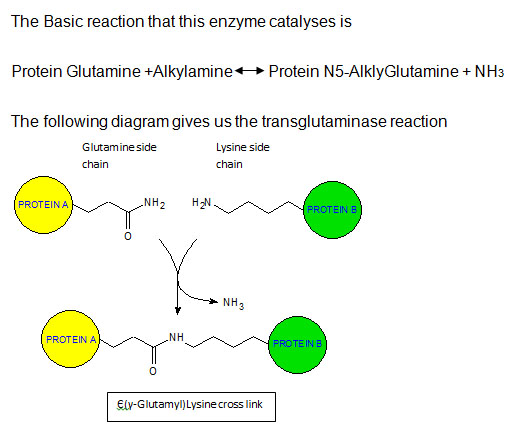 Examples of mammalian transglutaminases are

As well as the above, three other types are present:

Some other interesting facts about transglutaminase with respect to sequence alignment and structure:

Cysteine, histidine and aspartate (asparagines) are the three amino acids that comprise the catalytic triad. It has been found that the intermediate reaction is linked to the nucleophilic cysteine of the enzyme (Greenberg, C.S., 1994).It has also been found that papain-like thiol proteases share core structural folds with transglutaminase and exhibit similarities in two aspects; the reaction mechanism and in the catalytic triad. In 1999 (Kira S. Makarova, 1999), a study comparing and analysing a superfamily of archaeal, bacterial, and eukaryotic proteins homologous to animal transglutaminases was undertaken. It was found that the enzyme was comprised of three motifs: Motif I, containing the catalytic cysteine; Motif II, the active histidine; and Motif III, the active aspartate. The structure includes two strands for each of the three motifs and Motif I is associated with the α- helix. Two positions upstream of the catalytic cysteine another small residue is present and, also, unique aromatic residues are present in two positions downstream from the catalytic histidine and another aromatic residue at the N terminal side, flanking the catalytic aspartate. This small residue and the aromatic residues are conserved in animal and bacterial proteins. The two insert regions found inbetween these conserved motifs are different in archaeal, bacterial and animal transglutaminase.
Bacteria and archaea were found to have small inserts compared to animal species. On analysing the structure of Factor XIII using a multiple alignment, it was found that animal transglutaminase have two main inserts. The first insert present in animals was found to interact with the conserved β-strands and is positioned between Motif I and Motif II; it is a large structure compared to the inserts present in archaea and bacteria. The second insert is placed specially to interact with the C terminal domain of eukaryotic proteins (Kira S. Makarova, 1999).

There is an increasing interest in the inhibitors of transglutaminase. To name a few: cystamine, N-ethyl maleimide, iodoacetate, parachloromercuribenzoic acid, imidazoles and thiadiazoles. (G.A.H. DE JONG, 2003)

The problems associated with mammalian transglutaminase are:

Transglutaminase is used to cross-link proteins. Usually it is used for meat binding and the joining of small chunks of meat into one big portion. In the meat industry transglutaminase is also used to improve low-grade meat which can be used to reduce overall cost. The following are some of the improvements that can be made in food properties:

Transglutaminase (Factor XIII) is used in tisseal to form a ‘biological glue’. It is a mixture of fibrinogen, thrombin and Factor XIII. It is used in surgery to prevent blood loss and seal wounds. Transglutaminase is known to link fibrin molecules during the blood clotting process. Its use can reduce the need for stitches and contribute to the repair of fractures and cartilage lesions. In the liver, especially, this tisseal is a used to prevent blood loss. Transglutaminase is known to facilitate the scaffolding of proteins which is known to support further tissue healing and tissue re-formation (Yang Zhu 2008). In other words, this transglutaminase-facilitated scaffolding provides a durable matrix for cell attachment and further helps the spreading and proliferation of the cells involved. Thus transglutaminase has applications in tissue engineering.
The regulation of transglutaminase in mammals is very important. Recent studies have shown that transglutaminase plays a key role in certain chronic diseases. The cross-linking properties of this enzyme and its role in stabilisation reveals that any changes (down regulation/ negative control) in the regulation of this enzyme can lead to inflammatory diseases , ‘auto-immune conditions, chronic degenerative diseases like arthritis, atherosclerosis and neurodegenerative pathologies’ (Martin Griffin, 2002) like Huntington’s chorea, Alzheimer’s disease, and Parkinson’s disease. Transglutaminase is also involved in the treatment of cancer and tumours as it plays a role in cell death and apoptosis.
Geobacter sulfurreducens
Geobacter sulfurreducens is a metal-reducing anaerobic bacterium. It was isolated in a hydrocarbon-rich mine in Norman, Okla.Geobacter sulfurreducens measures about 2µm by 0.5 µm and is rod-like in shape. It is grown invitro on a defined medium containing acetate as the electron donor. Fumarate, malate, ferric citrate can act as electron acceptors. Optimum temperature for growth is around 35° C. The c-type cytochromes are observed in whole cells.

Its classification is as follows:
Super Kingdom: Bacteria
Phylum: Proteobacteria: Bacteria classified under this phylum are gram negative having outer membranes composed of lipopolysaccharides. Most of them have flagella required for their motility and pilli like structures for attachment. They are either chemoautotrophs, heterotrophic or facultatively or obligately anaerobic.
Subphylum: Delta/epsilon subdivions
Class: Deltaproteobacteria
Order: Desulfuromonadales
Family: Geobacteraceae
Genus: Geobacter
A previous study conducted by Janet Rollefson, Caleb Levar and Daniel Bond (Janet B. Rollesfson, 2009) has revealed that this bacterium is involved in microbial fuel cells. Previous research has shown that Geobacter sulfurreducens is capable of generating power in microbial fuel cells. Geobacter sulfurreducens is used mainly for:

This bacterium is our research organism whose genome has been sequenced previously. We shall be looking at the putative transglutaminase gene to check whether it encodes for transglutaminase or not. If successful and rightly proposed this novel enzyme can be marketed and will find applications as described previously.
Transglutaminase is found to be associated with sporulation in bacteria and is involved in assembling the spore coat proteins. Transglutaminase is found to be localised on the spores of bacteria especially in the Bacillus species, namely Bacillus subtilis, Bacillus cereus, etc.(Kobayashi K, 1998). During the process of sporulation, there are two point of regulation; firstly, the production and expression of several proteins involved in coat formation and, secondly, the assembly of these coat proteins to form a rigid structure that is resistant to degradation by other proteolytic enzymes. Transglutaminase is thus found to play in role in cross-linking the spore coat proteins and forming rigid supra-molecular structures (Katerina Ragkousi 2004).
Geobacter species are found to play a role in environmental restoration. They have been used to feed on oil spills and ground-water pollutants to clean the environment.