CHAPTER 2. THE PERCEPTION OF ‘OTHERNESS’ OR DIFFERENCE
(Exploring the image of the black African male):

In 17th-c entury Western Europe, the depiction of the black African male was drawn from contact between English explorers and native African people in the early to mid- 16th C entury. The emphasis here is on the Western European societies, not only because Shakespeare was English but also because Southern European countries such as Portugal had experienced Northern and Northwest Africa up to 150 years prior to the English. Thus their perception of Africans may differ from the Western perception.

In England, perhaps more than in Southern Europe, the concept of blackness was loaded with intense meaning. Long before they found that some men were black, Englishmen found in the idea of blackness a way of expressing some of their most ingrained values. No other colour except white conveyed so much emotional impact… black was a symbol of pollution and dirt, baseness and evil, it was a sign of danger and repulsion.
(Jordan, W, 1968)

Africa and Africans have figured in English d rama from the 16th C entury, though many of the African settings and characters were inaccurate and could be seen as racist misrepresentations. Historically, English writers depicted African characters as simple stereotypes associating them with laziness, lust and treachery (Boyce, C, 1990, p. 476). These fantasy characterisations of African people were common image constructs during this time and early writings also generated the image of Africa “…as a mysterious land where strange animals existed within a totally different environment state.” (Hall, 1995)

It seems from this early point of view, that the most basic crime of the African was that he wasn’t European. The white Westerner viewed blackness as a negative and unnatural trait; thus the identities and social values of African people were undermined by a Western European interpretation of African culture.

One of the intrinsic parts of recognising ‘difference’ or ‘otherness’ is the identification of physical attributes and what these physical attributes signify when they become part of a deliberate representation. The term “Representation, refers to the construction of aspects of reality such as people, places, objects, events and cultural identities within any medium” (Branston and Stafford, 1996, p. 78). The most common forms of representation occur visually and as an audience we cannot help but read the images or actions that are being represented towards us. All images are considered readable texts and they send out a message to the viewer or reader. The image below of Laurence Olivier’s portrayal of Othello (see fig. 1) is saying something, not only about the person or the occasion, but also about ‘otherness’ or ‘difference’. The ‘difference’ has been marked but how it is read and interpreted depends on the cultural status of the reader and also the representation of the people who are racially different from the majority of the population.

But why does otherness or difference matter? In linguistics, the main argument is that difference is essential in creating meaning. Saussure argued that we know what black means, not because blackness has essence, but because it is contrasted with its opposite, white. He argued that meaning is relational and it is the ‘difference’ between black and white that signifies and carries meaning (c ited in, Hall, 1997, p. 234).

This concept of relational meaning can transmit to broader concepts too. For example, we know what it is to be Christian not only because of certain religious characteristics but also because we can mark its ‘difference’ from the ‘other’ religions, i.e., Christianity is not Judaism, not Sikhism, not Hinduism and so on. The image of Othello wearing a gold cross (see fig. 1) enables him to represent or signify his ‘Christian-ness’ which serves to assimilate him with Venetian society. But his black skin contests this sign, because in 17th-c entury Europe to mean ‘Christian-ness’ was to mean whiteness. This example shows how ‘difference’ signifies and carries a message in performance. 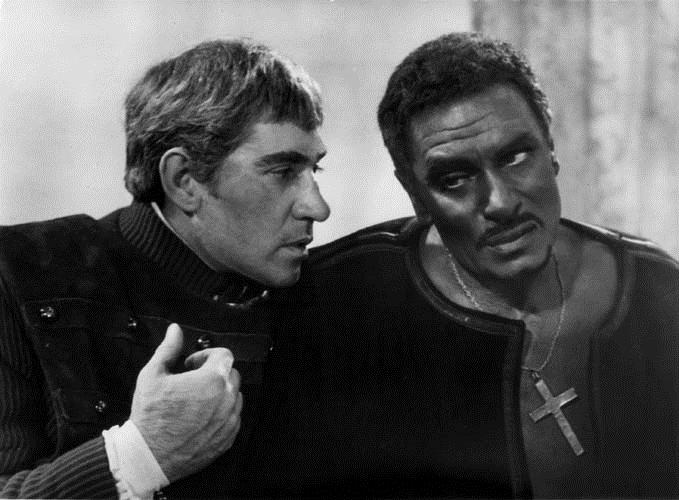 The marking of ‘difference’ in anthropological terms depends on giving things a meaning by assigning them different positions within a classificatory system. French anthropologist Claude Levi Strauss argues that social groups enforce meaning in their world by ordering and organising subjects into classificatory systems. Binary oppositions are crucial in this practice of classification because the ‘difference’ between things affects the way in which they are classified (c itied in Hall, 1997, p. 236).

In 17th- century Western Europe, social cultures were constructed using this classificatory system and the definitive categories segregated people depending on their gender, employment and race. Through this categorisation their social position was identified and fixed. If the white, Western, middle-class male was at the centre of European society, then the black, African, working-class male would be his binary opposite, situated on the edge of European society. Although Shakespeare has not written Othello as a stereotypical African character, his blackness still signifies his alienated position, he is out of place in Venetian society. In anthropological terms whatever is defined as ‘other’ or out of place is considered polluted, dangerous or unmentionable. Thus the ‘other’ must be excluded or eradicated in order to restore the purity of the category.

Although Shakespeare does not seem to harbour racist views he could be seen to be showing the pollution and restoration of a social category in Othello. By deciding to assign Othello to a tragic suicide at the close of the play it could be said that the elimination of Othello’s character through death, was in fact an elimination of the ‘other’ and a confirmation of Shakespeare’s awareness of social prejudices. Othello’s blackness polluted Venetian society and his removal by suicide expelled this blemish thus the purity of the ‘normal’ white society was restored.

Othello is not considered to be a stereotypical black character in English drama because he is intelligent, gentle, romantic and heroic, and he is often referred to as “Noble Moor” by Desdemona. This is quite a contrast to the treacherous and barbaric black characters constructed in other English novels and plays. Nevertheless, the other characters in the play, such as Iago and Brabantio, seem to be influenced by the Western perception of the b lack stereotype. Stereotypes get hold of the few, simple, memorable and widely recognised characteristics about a person and culture and reduce everything about that person or culture to those traits. This action creates a generalised overview or a misrepresentation.

Another feature in stereotyping is the practice of exclusion and closure; it fixes boundaries and excludes everything that does not belong. The racist characters in Othello are resigned to the idea that black is negative and they refuse to see beyond that, thus Othello’s positive actions are rarely taken into account and he is a victim of a Hegemonic social system. Dyer observes,

The establishment of normality (i.e., what is accepted as normal) through social stereotypes is one aspect of the habit of ruling groups…to attempt to fashion the whole of society according to their own world views, value system, sensibility and ideology. So right is this world view for the ruling groups that they make it appear (as it does appear to them) as ‘natural’ and inevitable – and for everyone – and, in so far as they succeed, they establish their hegemony.(Dyer, 1986, p. 30)

Focus on the Learner – English as a Foreign Language: Student Case Study
A clinical overview of Doxorubicin hydrochloride
Strategic Analysis of Marks & Spencer Plc
IT and Internet’s Impact on Tourism and Hospitality Industry: Implementations of technologies for Hi...
Gemfields PLC: operations and strategic aims
Meaningful occupation in older age
Online Chat WhatsApp Messenger Email +44 800 520 0055
We value your privacy. We do not sell your data and do not resell our papers. We use cookies which you can view and control.