Covid-19 Update: Our office is not open for face-to-face meetings however our support agents are still here to help you 24/7. If you can't find the service you are looking for, just drop us a message or WhatsApp us - we can help with any academic writing! ✖

The accumulation of metabolites has an effect on exercise tolerance, fatigue and other physiological responses. This effect on exercise can be investigated by prior exertion using a different set of muscle groups (Bangsbo, Madsen, Kiens and Richter, 1996; Nordsborg et al., 2003; Johnson, Mills, Brown and Sharpe, 2014). For example, the effect of prior exercise using high intensity arm cranking on maximum cycling power has been examined (Johnson et al., 2014).
The aims of this project were to investigate the effects on performance in a 5 km cycling time-trial of a prior warm up, which used the same muscle groups i.e. legs, with prior upper body exercise (arm cranking) which used a different set of muscle groups. The results of these two groups are compared to a control group in which no prior exercise was performed.

Thirteen subjects with a mean age of 20.1 years ± standard deviation (SD) of 0.9, mean height of 180.3 cm ± 9.5 and a mean weight of 76.0 kg ± 8.0 were entered into the study. Informed consent was received from each participant.
Participants refrained from exercise and drinking alcohol on the day preceding the time trials, and also refrained from consuming any food or caffeinated drinks in the 2 hours preceding arrival at the laboratory. Participants consumed one pint of water one hour before arrival at the laboratory. Subjects were divided into three exercise groups.
In the control group subjects performed a 5 km cycling time trial, using a Watt Bike, without any prior exercise. Nude body mass was taken pre and post exercise to estimate the loss of fluid by sweating. A blood sample was also taken pre and post exercise for the determination of lactate concentration. Measurements of heart rate and Rated Perceived Exertion (RPE) were taken at baseline and at each km of the cycling time trial.
In the second group subjects performed a self-paced 10 minute warm-up on ergometric cycles prior to the time trial. The heart rate was maintained between 70% and 80% of the predicted maximal heart rate. This was calculated as 220 minus the age of the subject. After the warm up there was a 2 minute rest period before the time trial began. Measurements of lactate concentration were taken at baseline, following the warm up and at the end of the trial. Measurements of heart rate and RPE were taken at the same intervals as the control group.
In the third group an arm cranking exercise preceded the time trial. This comprised 8 x 1 min arm cranking bouts at an intensity of 1.5-2 W per kg of body mass. Each bout of exercise was separated by a 30 second rest interval, with a 4 minute rest period separating the last bout of exercise and the beginning of the cycling time trial. Measurements were taken at the same times as the warm up group.
Analysis of variance (ANOVA) was performed using an online tool (Kirkman, 1996), and t tests were also performed online (Student’s T-Test, 2011).

In the control group (n = 11) nude body mass was 76.0 kg ± 8.0 prior to exercise and 75.9 ± 8.1 post exercise. A matched t test showed that this difference was not statistically significant (p = 0.32). There was no statistically significant difference in time-trial times between control, prior warm up and prior arm cranking exercise groups; values were 491.00 ± 34.22; 483.54 ± 27.23; 504.50 ± 45.00 seconds respectively. A one way ANOVA gave a p value of 0.35 (F statistic = 1.083; 2 degrees of freedom (df)).
Following exercise on an ergometric cycle heart rate in the control, prior warm up and prior arm cranking exercise groups increased (Figure 1). The results obtained were similar for each group with the mean heart rate of each group increasing markedly from baseline to measurement at 1 km and being maintained throughout the time trial. One way ANOVAs showed that these changes were statistically very highly significant in each group. ANOVA results of change in heart rate over the time courses of the groups gave p values of < 0.0001 for each (control, F = 110.0; prior warm up, F = 163.1; prior arm cranking exercise, F = 84.3; 5 df). 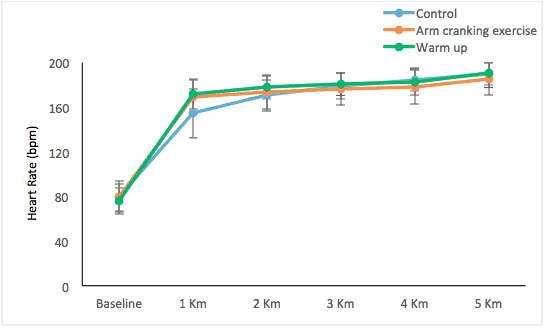 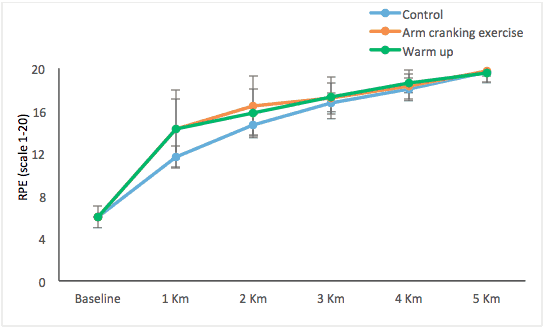 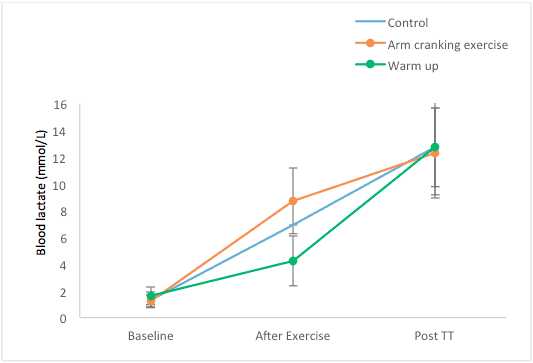 Tailored service with
every order

You are protected by
UK consumer law

Need a Dissertation?
It’s quick and easy. Fill in your requirements and our academics will get started on your work!
ORDER NOW
Online Chat WhatsApp Messenger Email +44 800 520 0055
We value your privacy. We do not sell your data and do not resell our papers. We use cookies which you can view and control.