Four of the most widely used SCMs, namely the Protection Motivation Theory (PMT, Rogers 1975), the Health Belief Model (HBM, Rosenstock, 1974), the Transtheoretical Model (TTM, DiClemente, 1993) and the Theory of Reasoned Action (TRA, Fishbein & Ajzen, 1975)/Theory of Planned Behaviour (TPB, Ajzen & Madden, 1986) have ben employed in the area of preventative health, such as cervical screening (Marteau, 1989). These models and their applications will be described in the following sections.

The basis for all SCMs is the assumption that an individual’s behaviour is a deliberative decision-making process, determined by a dynamic interaction of all the individual’s subjective thoughts and the available stimuli derived from the environment (Conner & Norman, 2005). In other words, an individual’s decision to perform a specific health behaviour is a result of a deliberate subjective cost-benefit evaluation, whereby different courses of action, such as attending for cancer screening are considered. It can be argued that such an approach is concerned with making a trade-off between several options with different probabilities and utilities (i.e., the subjective evaluation of that outcome (Baron & Baron, 1994)). This approach is rooted in the expectancy-value theory (Peak, 1955) and the subjective expected utility theory (SEU, Edwards, 1954), which postulates that individuals aim to maximize utility, such as health, and therefore choose the behaviour which is most likely to achieve the highest expected utility after having evaluated the benefits and costs of a specific health problem, such as breast or cervical cancer. The PMT, HBM and the TPB all have these underlying assumptions.

Transtheoretical Model (TTM)
The Transtheoretical Model of behaviour change was originally introduced to explain the history of remission and relapse in addictive disorders (DiClemente, 1993). In essence, the model provides an understanding of how people change their behaviour. The underlying assumption is that people move through changes and that each stage is profoundly different from the last. The model includes five sequential stages, ten processes (experiental and behavioural) – which individuals mostly use to facilitate change, decisional balance (pros and cons) and self-efficacy (the individual’s confidence and temptations that they can make changes).

Stages of Change
The model consists of five stages that are outlined below (adapted from Prochaska, Redding & Evers, 2002):

Whilst the model proposes that individuals are moving through these distinct stages, at the same time it acknowledges that some may relapse from ‘action’ or ‘maintenance’ to an earlier stage. The actual processes of change are the covert and overt activities that help individuals in progressing through the stages of change. There are five experiential and five behavioural processes that are listed below.

In order to explore the model’s effectiveness in terms of correctly predicting discontinuity patterns, Rosen (2000) carried out a meta-analysis examining 34 studies. For clarification, exploring discontinuity patterns means examining whether certain variables are increased between certain stages such as between Stage I and Stage II, whilst not showing any difference between other stages, e.g., Stage II and Stage III. One of the findings was that in 85% of all studies investigated, behavioural processes peaked during action or maintenance stage. These are the stages, according to Prochaska et al. (2002) in which behavioural processes are predicted to peak, whereas the experiental processes are expected to decline. In terms of the increase of experiental processes, Rosen (2000) reported that in 41% of all studies investigated, these processes peaked in the contemplation or preparation stage as proposed by Prochaska et al. (2002). It was, however, also noted that there was inconsistency in the use of these different change processes at different, unexpected stages across a number of health behaviours.

Limitation of TTM
As outlined above, the TTM makes suggestions for the duration of time that the individual may stay in a stage before progressing to the next, for example, moving from the contemplation (enacting within the next six months) to preparation stage (thinking of changing within the next 30 days). Kraft, Sutton and McCreath-Reynolds (1999) argue that there is little empirical evidence that these stages are qualitatively different.

Marks, Murray, Evans and Willig (2000) reported that the model inadequately addresses the social aspect in which many health behaviours, such as drinking alcohol, actually occur.

Further, it has been commented that this model is: “…neither a theory nor a model, but a tautological description of what must logically occur” (Roberts et al., 2001, p. 81).

Continuum Models of Behaviour Change
In the following section, three of the most widely employed models (PMT, HBM, TRA/TPB) will be outlined and discussed.

Figure 1 below is a graphical representation of the model (adapted from Conner & Marks, 2005). 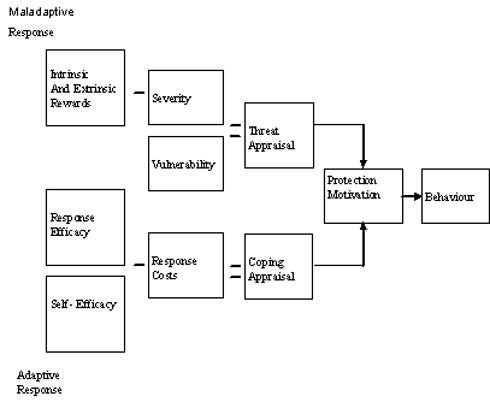 It can be seen from the graphic representation above that the theory postulates that people’s intention to protect themselves from a health threat, for instance breast cancer, is the result of the evaluation of their threat and coping appraisal. More precisely, in completing their threat appraisal people estimate the seriousness (or severity) of the disease as well as their own vulnerability to this disease (e.g., the likelihood of having breast cancer).

Their coping appraisal, on the other hand, consists of their response efficacy as well as self-efficacy. The former refers to people’s expectancy that performing a recommended action would remove the threat, whilst self-efficacy is people’s belief in their own ability to execute the recommended action or behaviour and therefore to avert the health threat.

In terms of the model’s effectiveness, meta-analyses carried out by Floyd, Prentice-Dunn and Rogers (2000) and Milne, Sheeran and Orbell (2000) showed that, overall, the model’s variables were able to significantly predict intention and behaviours, but they were less able to predict future behaviour. Both meta-analyses indicated that threat appraisal had small effect sizes, whereas coping appraisals were found to be of medium effect size (Norman, Boer and Seydel, 2005). It was noted, however, that the model was weaker in its ability to predict future behaviour.

Limitation of PMT
One limitation of this model is that it puts the primary focus on people’s intention and to a lesser extent on their subsequent behaviour (Prentice-Dunn & Rogers, 1986). A study by Orbell and Sheeran (1998) concerning breast self-examination also showed that the model was unable to discriminate between women who had the intention of examining their breasts from those who had no intention. The model was also unable to account for women’s future behaviour.

Besides, it has been acknowledged by a number of researchers, such as Vadaparampil et al. (2004) that, whilst the PMT has been employed within a variety of health domains, it is less utilized within the cancer screening setting and in particular within the context of cervical screening.

Blanton, H and Gerrad, M (1997) Effect of Sexual Motivation on Men’s Risk Perception for Sexually Transmitted Disease: There Must Be 50 Ways to Justify a Lover. Health Psychology, 16, 374-379.

Eiser, R and Cole, N (2002) Participation in Cervical Screening as a Function of Perceived Risk, Barriers and Need for Cognitive Closure. Journal of Health Psychology, 7, 99-105.

Fishbein, M and Ajzen, I (1975) Belief, attitude, intention and behavior: An introduction to theory and research, Addison-Wesley, Reading.

Rosen, C (2000) Is the sequencing of change process by stage consistent across health problems? A meta-analysis. Health Psychology, 19, 593-604.

Rosenstock, I M (1974) The health belief model and preventive health behavior. In Bandura, A (1998) Health Promotion From The Perspective of Social Cognitive Theory. Psychology and Health, 13, 623-649.

Sutton, S (2001) Back to the drawing board? A review of applications of the transtheoretical model to substance use. Addiction, 96, 175-186.