The activation and clonal expansion of naive T cells after the initial encounter with the antigen is called priming and is controlled by variety of signals. The first signal involves interaction between TCR and MHC II. The second signal is a costimulatory signal while the third involves the stimulatory signal provided by the cytokines (Janeway, Murphy et al. 2008). 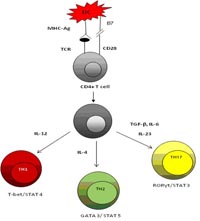 The first evidence of the inflammatory role of IL-17 arose 10 years ago, when Fossiez and colleagues cloned human IL-17 from activated memory T cells and showed that adding IL-17 to primary cultures of human RA synovial fibroblasts induced expression of IL-6, IL-8, prostaglandin E2, and G-CSF (granulocyte colony stimulating factor)(Fossiez, Djossou et al. 1996). Reviewing the function of IL-17 and IL-23, Ouyang et al found that IL-23 and IL-17 were associated with the many human autoimmune disorders such as multiple sclerosis, rheumatoid arthritis and psoriasis and validated the findings in the mouse model (Ouyang, Kolls et al. 2008).

Dendritic cells (DC) – regulators of tolerance and immunity
These are the most specialised cells for initiating T cell responses. Distinct DC population differentially affect T cell activation leading to T cell tolerance, anergy or induction of regulatory T cells. This property of plasticity of the dendritic cells can be used therapeutically in the treatment of autoimmune diseases and help to reinstate tolerance or immunity (Thomson and Robbins 2008). Mature DC expresses high level of costimulatory molecules and thus induces immunity. Immature or “semimature” DC express low level of costimulatory molecules and can induce antigenic-specific T cell tolerance / hyporesponsiveness (Lu, McCaslin et al. 1995). However, the immature DC is not stable and undergoes maturation after stimulation by a pathogen, derived molecule or a pro-inflammatory cytokine. Therefore, tolerogenic dendritic cells (Tol DC) with low co-stimulatory molecules and capable of expressing anti-inflammatory cytokines were considered as a suitable option as a therapeutic tool. (Anderson, Sayers et al. 2008).

Innumerable papers have studied the role of IFN-γ producing TH1 cells in the pathogenesis of autoimmune diseases. They have detected their crucial role in EAE and act independent of the IL-23 dependent immune response (Langrish, Chen et al. 2005). Conversely, IFN-γ has not been found to be a key driver in autoimmune diseases. Since, IFN-γ -/- mice were found to be susceptible to disease (Steinman 2007).

Discussion
Through various papers and theoretical investigation, it has been established that Tol DC have the ability to control the immune activation and modulate the immune response via anergy, induction of apoptosis and Treg induction (Healy, Collins et al.). The expression of IL-10 and lack of co-stimulatory molecules on Tol DC have been identified as mediating factors in immune suppression (Wakkach, Fournier et al. 2003). The data reveals the following characteristics of the Tol DC stimulated Th1 and Th17 cells in vitro: decreased IL-17 and IFN-γ production, high IL-10 (Lan, Wang et al. 2006) and low proliferation by TH17 cells. Th1 cells have low IL10 production ability with high IFN-γ production and varying proliferation profiles. These findings of low proliferation with IFN-γ production is consistent with Tol DC treated Th17 cells which have in vivo efficacy, including those used to treat arthritis in animal models (Kim, Kim et al. 2001; Anderson, Swan et al. 2009). It was also found that the alternatively activated dendritic cells were capable of polarising the cytokine profile towards higher IL-10/ lower IFN-γ production. This was thought to be beneficial for the prevention of graft rejection or treatment of autoimmune diseases which was later found to be true in case of patients receiving graft transplant.

The IL-12 is the major cytokine that induces the Th1 skewing to produce IFN-γ. The presence of TGF-β and IL-6 are required for the induction of Th17 cells but may not assist in full commitment of the cells and therefore as suggested by various studies IL-23 stimulated the differentiation of the Th17 cells. Data reveals IFN-γ production by the Th17 cells. It has been found that the Th17 cells showing IFN-γ production is due to the IL-23 since it did not seem to inhibit the IFN-γ expression (McGeachy, Bak-Jensen et al. 2007).

It has also been learnt that superantigens polyclonally stimulate the T cells by bridging the constant regions of the MHC molecule and the vβ region of the T cell receptor. Thus, the whole T cell population with that particular vβ region can respond to respective superantigen. This leads to a large population of the T cells responding to the superantigen. This response of the T cells can be detected in vitro without priming. Thus, the receptors on the T cells are down regulated, altering the biology of the cell and further diminishing the responsiveness of the cell (Niedergang, Hémar et al. 1995). The maturation of the dendritic cells play an important role in determining potential of the cell based therapy. The LPS stimulus improves the antigen presenting ability of the dendritic cells which is essential for the effective immunity. However, when dendritic cells are treated with immunosuppressive drugs like dexamethasone and vitamin D3, they become resistant to maturation stimuli. Such cells express low levels of CD80 and CD86 molecules.

CONCLUSION
Considering the previous studies and the data presented, it might be possible that the tolerogenic dendritic cells could help in inducing tolerance in the CD4 + T cells and thus have a possible immunotherapeutic potential.

About me:
I am a motivated, flexible and sincere professional with a Masters degree in biotechnology, Masters of research in Immunology from Newcastle University and a Postgraduate Diploma in clinical research. I am very hard working and detail oriented with the effective ability to multi-task. I have strong knowledge in invitro plant and animal tissue culture, immunological techniques, IPR and biotechnological techniques. I love reading science fiction and keeping myself updated on recent science developments. I aspire to become an expert in my specialised subject and work in an organisation where innovation and excellence is the way of life, where my full potential will be explored and where I will get ample scope for development.