There are several beautiful mythological stories from Classical civilization. The most beautiful is the story of Psyche and Eros (Psyche and Cupid). The tale is different from most ancient legends as it is romantic and has a happy ending. The myth was about the daughter of a king and queen. She was described as stunningly beautiful as she was even compared to several Goddesses. The myth in this story has been compelling as it has aided to shape modern conceptions of love and modern romantic literature. Several artists have painted the mythological story. The paper seeks to describe two artists and their artworks relating to this romantic tale. 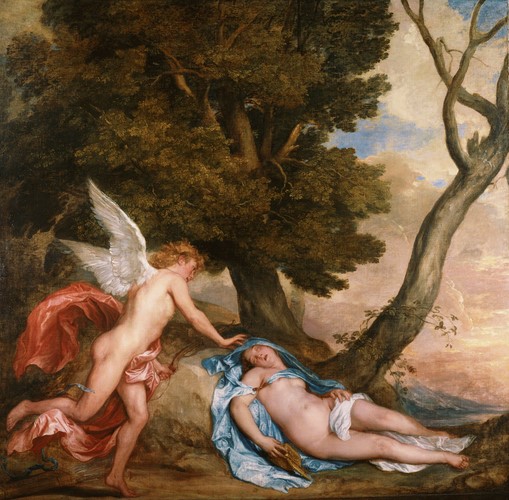 Anthony van Dyck was a victorious Flemish painter during the 17th century (the Baroque period). He was born in Antwerp on the 22nd of March, 1599 and died on the 9th of December, 1641. His talent and prolificity led him to become the most known artist from Flanders (modern-day Belgium), enabling him to be identified as one of the art superstars in England (Dyck and Russell 41). Dyck is currently known as his artworks are viewed in collections across the world. In addition, he is best known for his European aristocracy portraits, particularly Charles I and his associates and family.

Dyck’s artwork on Cupid and Psyche represents the mythological story of Cupid locating Psyche and saving her from a forbidding dark sleep. The composition of Van Dyck has the diagonal of bodies echoed by its background that presents the diagonal of the living and dead tree. This composition strengthens the tale about the touch of Cupid, bringing life back to Psyche (Joy of Museums Virtual Tours). In the art, Psyche assumes the form of a body in Lamentation; on the other hand, Cupid is portrayed as an angel with hope. Tiziano Vecellio or Vecelli (1490-1576), known in English as Titian, was the most famous painter of the sixteenth century. He was the main inspiration of Anthony van Dyck as his pictures were significant features of Charles I’s collection. Also, this painting is the only surviving mythological artwork the employment of Dyck. The artwork was created in 1605 with the dimension, 68″ (172.7 cm) by 52″ (132 cm) (Royal Collection Trust Home). It is now located in Royal Collection Museum and is shown in Kensington Palace.

“Amor and Psyche” by Jacopo Zucchi 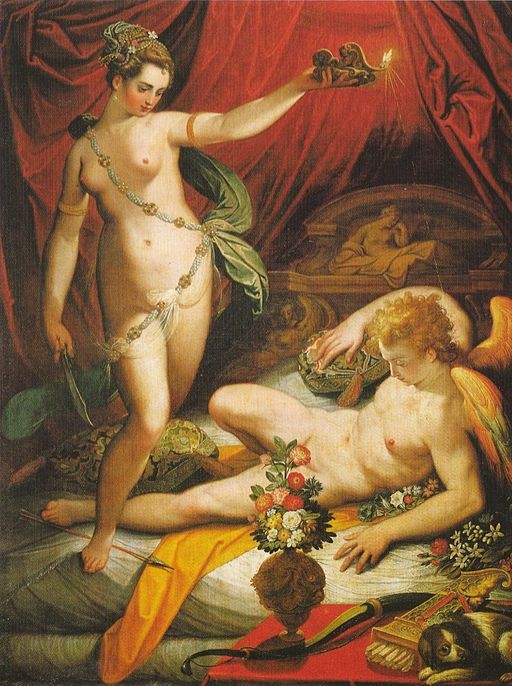 Jacopo Zucchi was born in 1551 but died in 1590. He was a Florentine painter of the Mannerist style, active in Rome and Florence. Zucchi started his training in Giorgio Vasari studio. He also participated in the decoration of Salone dei Cinquecento in the Palazzo Vecchio and the Studiolo. Zucchi worked for the Cardinal Ferdinando de’ Medici in his Palazzo Firenze in the early 1570s after moving to Rome (Joy of Museums Virtual Tours). With the help of his brother Francesco, he assisted in decorating the dome and apse of Santo Spirito in Sassia with a fresco of the Pentecost.

This painting by Jacopo Zucchi on “Amor and Psyche” represents the night when Psyche brings out a lamp and a dagger, she had concealed in the room to see and kill the monster that makes love to her though, she urges that Amor (Cupid) remains hidden in the dark. The light then divulges the most beautiful human she has ever seen. Psyche is so surprised that she injured herself on one of the arrows in the cast-aside quiver of Cupid (Joy of Museums Virtual Tours). When Psyche is struck with a burning passion, she spills the lamp’s hot oil and wakes up Cupid, as seen in the painting. This artwork is one of the several Jacopo Zucchi’s last artworks. It is an example of “convenient censoring” as the flowers provide modesty cover for Cupid as her jewelry safeguards Psyche’s modesty. The painting was created in 1589 with the dimension, 68.1″ (173 cm) by 51.1″ (130 cm). This mythological art is located at Galleria Borghese in Rome, housed in the former Villa Borghese Pinciana.

Relevance of the Artworks

These artworks on the story of Cupid and Psyche provides us with various themes. They touch on the themes of love, redemption, exile, disobedience, and jealousy. They represented an allegory of the journey of the Soul on earth and the union with the divine after death. Psyche was considered as the soul’s personification. Many believe that it portrays how a soul can fall to its death by participating in sexual love, illustrated by Cupid. The primary representation of these artworks is the story of the death and resurrection of the soul, which is the primary concern to the Mystery Religions of the Ancient Greeks, for instance, Orphism.

In addition, the artworks describe a fact of religion, nature, or science (the weather, birth, and death). They also provide an allegory for an issue encountered in common human psychology and experience. In connection to the modern world, the artworks, mainly Jacopo Zucchi’s artwork, shows that some individuals think that they are better than others (Whelan). Also, when two people get together, it is more likely that someone is mad about it. The artworks inspired many writers in their time to compose or write love or romantic stories (Joy of Museums Virtual Tours). The myth, separation, and reunification of the young lovers were repeatedly written in many romantic tales.

In conclusion, the story and artworks have been influential in reconstructing present-day ideas about romantic love. They have majorly influenced the way we used to understand human romance and love. They make us hopeful of love as they provide an idea that love will always find you and that true love will never leave one behind.