Most of the companies in today’s world are engaged in rivalry and fighting with their competitors for market share and sustainable and profitable growth, for product differentiation and for gaining a competitive edge in their products or services. W. Chan Kim and Renée Mauborgne use metaphors to describe different business models; they describe the strategy used by these companies to ensure profitable growth as Red Ocean Strategy which is not an appropriate strategy for growth in this cutting edge competitive environment. They also stated that companies cannot achieve success by fighting with their rivals. In a competitive environment, it is the time to make strategic moves and the best way to do this is to create “Blue Oceans”. This means creating uncontested market space for the profitable growth of the company which is not only beneficial for the company but also for the customers. It is the best strategy, offering competition with rivals and creating new demand for the product or service. (West, D.C. & Ford, J, 2010)<

In today’s unstable business environment, SMEs have to deal with many problems. These include a lack of real understanding of consumer demand, lack of flexibility and diversity in supply, financial constraints, lack of management skills, technological inabilities and lack of ongoing development of new products. It is essential that SMEs take the necessary actions to eliminate these problems as they are the obstacles to their profitable growth. The purpose of implementing or using Blue Ocean Strategy for SMEs is to eliminate these problems as it has one of the finest approaches for looking at the business and its expertise in specific areas. (Porter, M.E., 1998)

In order to survive in the market, SMEs tend to focus on establishing an advantage over the competition. They do so by working out ways that they can perform better than their competitors. The size of the market, however, remains constant as these SMEs are trying to corner the same market share as the others without creating their own new markets. This highly competitive attitude is referred to as Red Ocean and creating new markets is referred to as Blue Ocean. Some of the differences in these two strategies and reasons that SMEs should switch from Red Ocean Strategy to Blue Ocean Strategy are given below (Siegemund, C, 2008).

The key tools and processes involved in developing a Blue Ocean are: strategy canvas, four force action frame work, ERRC grid, and four hurdles to execution. Many other tools are also involved in this strategy in relation to SMEs but the key tools can be explained as follows: (Kim, W.C. & Mauborgne, R., 2005) 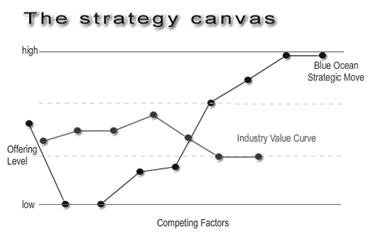 The strategy canvas is an analytical and investigative framework for making a convincing Blue Ocean. The horizontal axis includes those factors on which companies compete with others, including their investments. The vertical axis includes the factors which are offered by the company to the buyers among those key competing factors. One purpose of the strategy canvas is to capture the current position of the SME in the existing market. This will help strategists to understand which factors are utilised in the company’s current investment and completion focus. Another purpose of this is to work out ways the company can attract the attention of customers and non-customers so that they ignore the competitors. (Siegemund, C: 2008)

On the basis of these questions, the manager of the SME can use the information from the first question to eliminate certain factors; those which had contributed some value in past but no longer had much value for today’s consumers. The answer to the second question can compel the manager of the SME to consider reducing those factors which had been over-designed in order to compete in the market. By using the answers to this question, the cost structure can be reduced. The third question can be used to increase the industry’s standards by improving certain factors and the fourth question can be used to discover new sources of value for buyers (Porter, 1998).

The eliminate-reduce-raise-create (ERRC) grid complements the four actions framework and it basically forces the SME to act on all the four factors mentioned in the four force framework. This allows a new value curve to be created so that the Blue Ocean can be initiated in that company. When the four blocks in the grid are completed by accurately filling them in, the company can gain some of the important benefits.

The SME can, at the same time, introduce differentiation and low costs so that it can overcome the value-cost trade off. The ERRC grid helps the SMEs, especially those concentrating more on the aspects of ‘raising’ and ‘creating’. They are helped to increase their cost structures and their products and services by proper and accurate modifications which will make them different from others companies with similar problems. As developing this grid is not an easy operation, it compels the manager of the SMEs to be detailed in the work and evaluate every factor that the would need to become competitive. (Kim, & Mauborgne, 2010; Siegemund, 2008)

Once the managers of the SMEs have incorporated the Blue Ocean Strategy into a profitable business model, their biggest challenge is the necessity of executing the strategy. There will inevitably be some hurdles which can be difficult to overcome. The four hurdles which are predicted in this strategy are as follows:

The cognitive hurdle arises when there is the need to convince the SME’s employees of benefits of the change in the strategies of the organisation. Some people do not want changes in their routine as they are familiar with the profits that have been generated from the Red Ocean. The resource hurdle is never particularly significant in any SMEs because whenever strategies are to be changed, there is the need of resources. An unmotivated staff can be a hurdle; an unmotivated staff needs to be motivated so that the work allocated can be completed fast without the staff being stubborn. Last, but not the least, is the political hurdle which can be experienced in every SME or organisation. (Kim, & Mauborgne, 2010)

The use of the Blue Ocean Strategy will be explained by case studies; Cirque du Soleil and [yellow tail]:
Cirque du Soleil very successfully entered a structurally unattractive circus industry. It was able to reinvent the industry and create a new market space by challenging the conventional assumptions about how circuses. Its value was that it was innovative in altering the consumer group; from children to adults.

As shown in figure, the three foremost and most important criteria in Cirque du Soleil’s strategic profile, which were used to initiate the Blue Ocean, were focus, divergence, and a compelling tag-line. The strategy canvas of Cirque du Soleil’s competitors gives a comparison with the strategic profiles of their competitors, which can be expressed graphically. The canvas explains how Cirque du Soleil’s success came from changing from the traditional and conventional, using the Blue Ocean Strategy. The figure shows that the value curve of Ringling Bros. and Barnum & Bailey is the same basic shape as that of smaller regional circuses. The prime difference is that the regional circuses, due to limited resources, could not give up the more competitive factors. In contrast, Cirque du Soleil improved its value curve drastically by taking the path of the Blue Ocean Strategy. It introduced new and non-circus factors such as themes, multiple productions, a more comfortable viewing environment, and artistic music and dance. All these factors were adopted from aspects of the theatre and live entertainment industry. So, it can be learnt from the strategy canvas, the age-old factors which are used by other circuses have been entirely re-created by Cirque du Soleil. Its innovations set them apart in the value curve. Both these factors are on the strategy canvas – capturing the market. (Kim, & Mauborgne, 2010)

The eliminate-reduce-raise-create grid for Cirque du Soleil shows how it used this tool of the Blue Ocean Strategy to set it apart from others and succeed as a circus SME. Worth noting, is the range of factors that, in an industry that has a long history of competing in the business environment, can be identified, eliminated and reduced. Cirque du Soleil eliminated several factors practised in traditional circuses, such as animal shows, star performers, and multiple show arenas.

Casella Wines created [yellow tail], a wine whose strategic profile deviated from the norms of the competition and created a product using Blue Ocean Strategy. Casella, instead of selling his product as only a wine, sold it as a social drink and offered it to all age groups or to those consumers who liked beer, wine, cocktails and others. This social drink was one of the fastest growing brands and it created history in both the Australian and the U.S. wine industries. It became the biggest imported wine into the U. S., outselling the French and Italian wines. [yellow tail] exceeded all competition with no promotional campaigns, mass media, or consumer advertising. It didn’t simply steal sales from competitors; it grew the market. (Kim, & Mauborgne, 2010)

Figure shows how the developers of [yellow tail] could make the competition irrelevant in the U.S. wine industry. Here we can graphically compare [yellow tail]’s Blue Ocean Strategy with the more than 1600 wineries competing in the U.S. As shown in Figure, [yellow tail]’s value curve stands apart. Casella Wines, in the space of two years, by using this grid and acting on all these actions—eliminate, reduce, raise, and create – established a place in the market and surpassed all wine industries in U.S. (Kim, & Mauborgne, 2010)

It can be seen from these case studies that both SMEs created an exceptional value curve and used the Blue Ocean Strategy to render the competition irrelevant. They found alternatives so that they could survive in the market and hence their value curves diverged from other SMEs. The tag-line used by [yellow tail] made an impression and attracted interest; a fun and simple wine to be enjoyed every day. When expressed by means of a value curve, an effective Blue Ocean Strategy like [yellow tail]’s has three complementary qualities: focus, divergence, and a compelling tag-line.

It is very difficult to ignore the importance of SMEs; they contribute to the development process of the industry, help in job-creation equal income distribution, economic stability and sustainability, give birth to entrepreneurial spirit and maintain social stability. There are several factors which can affect the development of SMEs such as the policy environment, development of human resources, finance, changing technology, and also access to the useful information. On the other hand, due to growing demand and importance of SMEs, efficient management of SMEs is vital. Effective management is essential for achieving the preset goals and objectives. To survive in the market and to be successful, an organization must continue to improve and learn. The top management of the organization has to show by example, a willingness to accept change. Developing a Blue Ocean Strategy is not a static achievement but it a dynamic process which every SME must follow if they want profitable growth.

Copyright © 2005-2020 Ivory Research Co Ltd. All rights reserved. All forms of copying, distribution or reproduction are strictly prohibited and will be prosecuted to the Full Extent of Law.
<< Previous Sample
Next Sample >>

All our writers hold UK Degrees

Our large team of expert writers all have degrees from UK universities (minimum 2:1, through to Masters and PhD) and includes specialists in all academic disciplines. We guarantee your paper will be written by an appropriately qualified and experienced writer.

We value your privacy. We do not sell your data and do not resell our papers. We use cookies which you can view and control.