When a fluid flows past a bluff body (such as a circular cylinder) in a direction which is perpendicular to the axis of the body, boundary layers develop around the body. At a low Reynolds number, the fluid just flows past the body. However as the Reynolds number increases, the vortices tend to separate from the body surface and roll up at the downstream side of the fluid flow. Further increases in the Reynolds number will lead to alternate shedding of vortices due to adverse pressure gradient. This is known as vortex shedding (Downie, 2010). This phenomenon is shown diagrammatically below. 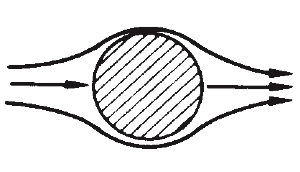 Fluid flow past a circular cylinder at very low Re

Figure 1 Vortex Street behind a circular cylinder (Harris, 2002). Consequently, as vortices are being shed on the cylinder surface, the cylinder experiences forces which are periodic in nature. These forces cause the cylinder to continuously vibrate as long as vortices are shed. According to Bai (2005), vortex-induced vibration occurs anytime when a sufficiently bluff body is exposed to a fluid flow that produces vortex shedding at, or near, a structural natural frequency of the body. This means vortex-induced vibration occurs when vortex shedding frequency is close or equal to the natural frequency of the body. Continuous periodic vibration of the structure could make it susceptible to fatigue failure. Hence offshore structural members must be designed to prevent VIV.

Basically, there are three types of vortex-induced vibrations. These are:

In-line vortex induced vibrations are caused by symmetric shedding of vortices on the surfaces of a bluff body. These usually occur at an average reduced velocity, VR of 1.25. In-line vortex induced motion comprises two regions: 1st and 2nd instability regions. In the 1st and 2nd instability regions, reduced velocities, VR ranges from 1 to 2.5 and 2.25 to 2.5 respectively (Downie, 2010). Vortex-induced vibration does not occur when VR < 1.

The region 5≤VR≤7 where lock-in of the vortex shedding frequency to the natural frequency of the cylinder occurs is called the synchronisation / lock-in / capture / resonant region. Consequences of lock-in include increase in correlation length, vortex strength, lock-in band width and in-line drag force; maximum relative amplitude and vortex shedding frequency locks onto the natural frequency. Lock-in can be seen as resonant oscillations (Faltinsen, 1990).

Different approaches that can be taken to prevent or reduce vortex induced vibrations include:

Fairings are designed to rotate, so as to align with the current, efficiently minimising vortex shedding and drag loading. Fairings operate most efficiently in structural members which are in a near vertical configuration. Fairings can reduce drag force to as low as one-third of its original value and they suppress VIV almost entirely but they are an expensive option. Less expensive alternatives include strakes. The less expensive alternatives are not as effective, but can be adequate in many instances (Bai, 2005; Chakrabarti, 2005).

Strakes are external ribs placed on the cylindrical structure, most commonly in a helical shape. Helical strakes act to disrupt the flow pattern by creating shorter and weaker vortices. They allow amplitudes of vibration with 10-30% of a diameter. A disadvantage of strakes is their 30-50% additional drag force, which can increase the potential for interference. Although strakes increase drag, they can reduce wave induced fatigue by damping the dynamic response caused by vessel motions. (Bai, 2005; Chakrabarti, 2005). Strakes destroy the correlation of vortex shedding along a structural member.

Shrouds produce a large number of small vortices. Therefore, regular vortex shedding is disturbed and a street of smaller and weaker vortices start to form only several diameters downstream of the body (Naudascher, 1994).

The aim of this section is to outline procedure needed to check whether structural members of a jacket structure are vulnerable to vortex-induced vibrations. The method employed is that given in the lecture material.

The procedure for checking individual structural members is as follows:

where An = constant which depends on end fixity

L = length of the member

I = second moment of area of the member

where D = external diameter of the structural member

ρ = density of the fluid

Iterate design lift coefficient, CLj until convergence is achieved. First take I/Io = 1. Calculate CLj and y/D. Read off turbulence factor, I/Io from graph of I/Io against y/D and put the value back into the equation for CLj.

where CLo = base lift coefficient

Io = correlation length factor which depends on the member fixity

where Kn = constant depending on fixity

A critical evaluation of methods used to assess implicit and explicit prejudice.
A discussion of case law and the creation of trusts
Financial regulations: consumers & financial stability
The potential positive and negative effects of fiscal stimulus in light of the UK’s fragile economic...
Black Book – differences in film & academic account
Managing Change at GlaxoSmithKline (GSK)
Online Chat WhatsApp Messenger Email +44 800 520 0055
We value your privacy. We do not sell your data and do not resell our papers. We use cookies which you can view and control.