Introduction
Multiple myeloma is a type of incurable plasma cells malignancy. This disease is characterized by clonal expansion of myeloma cells in the bone marrow, causing bone annihilation, impaired haematopoiesis, renal failures and other bone pathological fractures resulting in bone metastases. In the UK, nearly 3,300 new cases per annum are multiple myeloma(1).

In healthy adults, the adult skeleton bone is removed by large multinucleated cells of monocyte-macrophage cells, namely osteoclasts and this is followed by new bone synthesis by bone-forming cells of mesenchymal lineage cells, namely osteoblasts. This process is called ‘continual replacement’ in the healthy adult’s skeleton. The two processes are balanced in healthy adults, whereas in the case of pathological states such as cancer metastasis of skeleton, the process equilibrium is disturbed. Multiple myeloma is osteolytic; it distresses the skeleton and results in painful lytic lesions which may predispose to bone pathological fractures, decreased bone mineral density and hypercalcemia(2).

Regulation of bone resorption by OPG/RANKL/ RANK system
The identification of the OPG/RANKL/RANK system as a dominant, ultimate mediator of osteoclastogenesis is a major step forward in bone biology. Under normal and pathological condition such as cancer metastasis of the skeleton, osteoclasts are accountable for bone resorption. In turn, osteoclast formation is regulated by osteoblasts and other mesenchymally derived cells like bone marrow stromal cells(3).

The Amgen Group revealed that osteoporosis is related with a profound decrease in osteoclastogenesis and osteoclast activation. Furthermore, they revealed that major negative regulators of bone resorption are OPG (osteoprotegerin) molecules which play a key role in bone protection and regulating osteclastogenesis. Soon thereafter, the Amgen Group, using OPG as probe, identified the OPG ligand molecule/osteoclast differentiating factor and receptor activator of nuclear factor kappa B ligand (RANKL) molecules as an important mediator of osteoclastogenesis(4).

The molecular triad, namely OPG, RANK, RANKL, is produced by various types of cells and different tissues like osteoblasts, endothelial cells, smooth muscle cells, dendritic cells and lymphocytes. Although the molecular triad is involved in the orchestration of patho-physiological bone remodelling, other molecules like tumour necrosis factor alpha and Interleuckin-1 are involved in controlling the osteoclastic differentiation and thereby modulate the biological actions of the molecular triad. In bone, RANKL is an important stimulator of bone resorption; it stimulates osteoclast formation, activation, adherence and survival upon binding to RANK which is expressed by the osteoclast and osteoclast precursors, as shown in figure 1. In the normal bone microenvironment, OPG binds to RANKL molecules as a decoy receptor, so that the interaction between RANKL and RANK gets inhibited, therefore OPG inhibits osteolysis, as shown in figure 1(4). 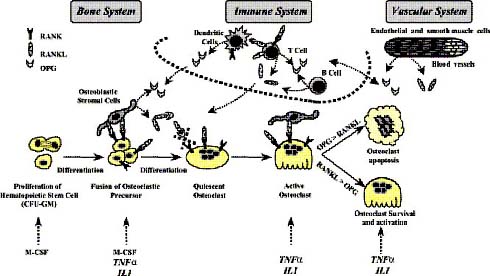 In multiple myeloma patients, myeloma cells cause bone marrow stromal cells to over-express RANKL for bone metastasis, whereas it decreases the OPG bio-availability in the bone microenvironment by expressing a gene called syndecan-1 on the surface of the myeloma cell. Syndecan-1 is a transmembrane proteoglycan which binds to the heparin-binding domain of OPG in the presence of heparan sulfates, and thereby internalizes and lysosomally degrades the OPG within the lysosomal compartment of myeloma cells. Hence myeloma cells disrupt the regulation of equilibrium between RANKL and OPG level in the bone microenvironment, resulting in improved RANKL to OPG ratio, thereby resulting in osteoclast formation and activation which is accountable for osteolysis, as shown in figure 2(5) (6). 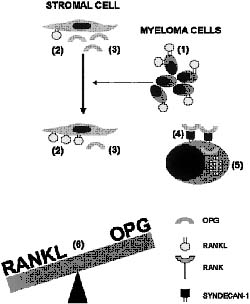 Thalidomide and Bortezomib – an everlasting drug in multiple myeloma treatment
Thalidomide is a successful drug with high response rates in the treatment of refractory and resistant multiple myeloma patients. The anti-tumour activity of thalidomide in multiple myeloma cells is a safe and effective method, but the mechanism of its action is not fully understood. Thalidomide exhibits its anti-tumour activity by the following mechanism: by blocking the blood flow to tumour cells (anti-angiogenesis) through inhibiting the factors like VEGF and basic fibroblast growth factors (bFGF), down-regulation of adhesion of MM cells to bone marrow stromal cells (BMSCs), G1 growth arrest of MM cells, shows a direct effect on MM cells/BM stromal cells via oxidative DNA damage, and blockage of cytokine secretion from MM cells and BMSCs, as shown in figure 3. This multi-faceted activity of thalidomide in the treatment of multiple myeloma has made it an attractive agent in single-agent chemotherapy or combinational chemotherapy treatment with corticosteroids(8).

An anabolic agent like bortezomib is the first representative class of drugs showing potent anti-myeloma activity by a significant elevation of alkaline phosphates (ALP) in the serum level. The rise in the serum ALP level is associated with stimulation of osteoblast differentiation and hence results in an anti-myeloma effect. Bortezomib is recommended for the treatment of refractory multiple myeloma patients. They are under investigation as a first-line therapy(9).

Multiple myeloma treatment using autologous stem cell transplantation involves six major processes: initially, the stem cells are collected from the peripheral blood and then they are subjected to processing in the laboratory. The processed stem cells are frozen using liquid nitrogen at -196 degrees Celsius and stored until needed. The multiple myeloma patients undergo high-dose chemotherapy. After chemotherapeutic treatment, the stem cells are thawed and infused into the patient. The transplanted stem cells commence to synthesize new blood cells, as shown in figure 4(12). 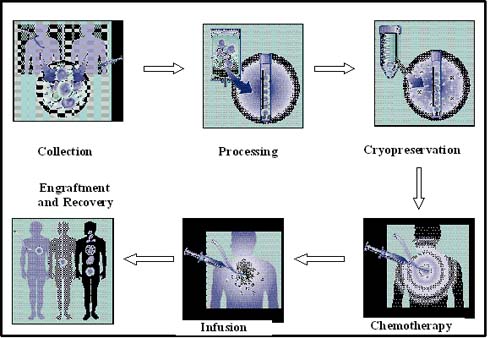 Immunotherapy
Immunotherapy is an active area of research in the treatment of multiple myeloma patients. Vaccines are manufactured to help the patient’s immune system to attack myeloma cells. Myelomas vaccines are synthesized from the patient’s own myeloma cells. The isolated myeloma cells are treated with the immune response stimulator (adjuvant) which elevates the body’s immune response against the multiple myeloma and makes a defence against it, as shown in figure 5. The various types of myeloma vaccines which are under current investigation are idiotype protein vaccines, DNA vaccines, gene-modified vaccines, cellular vaccines and dendritic cell vaccines. In addition to myeloma vaccine research, cytokines, monoclonal antibodies and alteration of immune cells are under investigation. The benefits of vaccines are that they are more specific to tumour cells and less toxic to patients than conventional therapies(16). 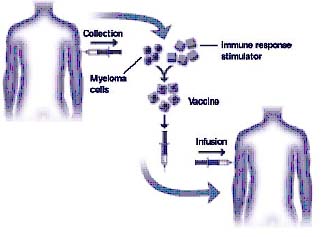 According to Pearse et al. (2001), an immuno-compromised mouse is injected with myeloma cells which are isolated from the bone marrow cells of myeloma patients. The injected mice are in turn intravenously injected with 200 micrograms of sRANK – Fc protein three times per week. As a result, bone resorption is prevented and there were distinctly fewer osteolytic lesions found when compared to the control, as shown in figure 6. This study revealed that sRANK – Fc protein may be a successful and efficient therapeutic option for diseases linked with extreme osteoclast activity. Intravenous injection of recombinant sRANK – Fc protein into the mice reduced the tumour burden and elevated the bone radio density(19). 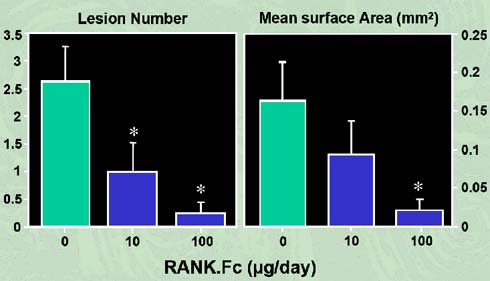 According to Croucher et al (xxxx), in a 5T2MM model, a syngeneic mouse is injected with murine 5T2MM myeloma cells. As a result, the syngeneic mice develop enhancive osteolytic lesions. In turn, the injected mice are intravenously injected with 30 mg/kg of OPG-Fc protein three times per week. As a result, there were distinctly fewer osteolytic lesions found when compared to the control. This study revealed that OPG-Fc protein not only prevented bone loss on subsequent injection of 5T2MM, but also increased bone mineral density and resulted in a complete non-appearance of osteoclasts, as shown in figure 7(20). 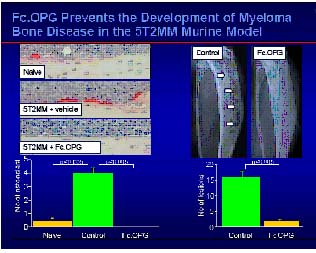 Figure 7: Fc-OPG prevents the development of myeloma bone disease in the 52TMM murine model (adapted from the slides of zolendric acid preclinical profile by Peter Croucher, University of Sheffield, UK, 2001).

According to Doran et al. (2004), myeloma cells are transfected (lenti-viral transfection) with native OPG-Fc gene and injected into immuno-compromised mice. This resulted in reduction in the development of lytic lesions, longer survival, reduced bone resorption and inhibited osteolytic lesions in the mice carrying OPG-Fc expressing tumours when compared to mice treated with the empty vector as control(21).

According to Onyia et al. (2004), an antiresorptive drug called AMG 162 (Amgen®; Amgen Inc., Thousand Oaks, CA) is a human monoclonal antibody against RANKL and thereby reduces bone resorption in post-menopausal women associated with multiple myeloma(22). High throughput screening methods are used to screen a small and selective compound called Cmpd 5 which is used to stimulate the OPG expression and reduce the bone resorption in mice treated with myeloma cell lines(22).

According to Pan et al. (2004), bisphosphonates, zoledronic acid can reduce the bio-availability of RANKL by decreasing the expression of RANKL on the surface of human osteoblast cells or by stimulating a TNF-α converting enzyme which cleaves the RANKL from the cell membrane. Also, bisphosphonates like zoledronic acid and pamidronate can stimulate the production of OPG by primary human osteoblasts in a dose-dependent manner. Combination therapy by anti-resorptive drug with anti-tumour agent leads to enhanced treatment of bone metastases(23).

Wnt signalling regulates the bone formation by osteoblastogenesis
The Wnt/β-catenin signalling pathway or the canonical pathway plays a vital role in the development and maintenance of bone. The canonical Wnt signalling is activated when the Wnt molecule binds and forms a complex within the receptor of low-density lipoprotein receptor-related protein (LRP5/6) and frizzleds receptor. Upon Wnt-receptor interaction, Axin and Frat1 are recruited to the membrane to form a juxtamembrane protein complex in addition with APC (adenomatous polyposis coli) and disheveled (Dsh). This large juxtamembrane protein complex inactivates the glycogen synthase kinase 3-beta (GSK-3β). The inactivated GSK-3β leads to stabilization and accumulation of its substrate β-catenin into cytoplasm. Upon translocation to the nucleus, β-catenin binds with the transcription factor called Lef1/Tcf, which alters the specific target gene expression, as shown in figure 8(24) (25).

Soluble Wnt antagonist can block the canonical pathway and encourage the degradation of β-catenin in two ways. Secreted frizzled-related proteins (Sfrps) can firmly bind with the free Wnt molecules and inhibit the Wnt molecules from binding with the receptors (i.e. interaction among Wnt with LRP5/6-frizzled surface receptor is inhibited). This results in activation of GSK3 molecules which phosphorylate the β-catenin and proteasomally degrade it. Alternatively, Dickkopfs (Dkk) molecule binds within the extra-cellular domain of the receptor Kremens (Kringle-coding genes marking the eye and the nose; Krms) and LRP5/6, followed by internalization of trimer complex into the lysosomes where LRP5/6 is degraded. Finally, the expression of LRP5/6 in the cell surface is decreased, hence Wnt signalling is disrupted, as shown in figure 8(24) (25). 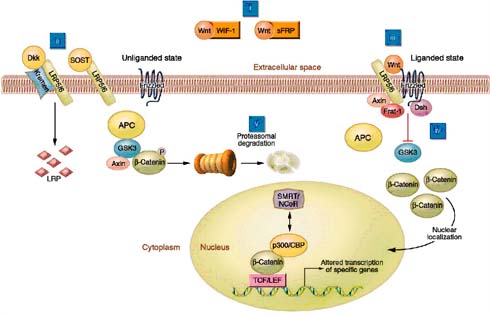 Conclusion
In skeletal biology, anabolic drugs play a vital role in targeting the Wnt signalling pathway for treating bone diseases. In adults, the bone formation rate can be altered by pharmacological activation of the Wnt cascade. In clinical practices, anabolic drugs therapy is introduced to reduce the risk of skeletal fractures in post-menopausal osteoporosis patients. A pharmaceutical product like terparatide, which is a human parathyroid hormone, is given to the osteoporosis patients to block bone resorption and stimulate a modest increase in bone mineral density by activating the Wnt/β-catenin pathway in bone. Identification and screening of drugs which specifically target the Wnt/β-catenin pathway in bone holds tremendous promise in the field of drug discovery(28). Secreted frizzled-related proteins (Sfrps) can firmly bind with the free Wnt molecules and inhibit the Wnt/β-catenin pathway in bone. Discovery of a small chemical compound or antibodies or peptides which tend to inhibit the Sfrps from binding with free Wnt molecules holds tremendous promise as anabolic agents in the treatment of bone disease(29).