The Role of Glutamate Receptors in Excitotoxicity during Stroke

Roles of Glutamate Receptors in Excitotoxicity following a Stroke:

Now, there are many processes in which glutamate receptors trigger excitotoxicity during ischemic stroke, and those are overlapping as well, some occurring simultaneously. Brain tissue requires a huge supply of oxygen and glucose due to the voracious metabolic rate, and the energy supply depends on oxidative phosphorylation. Neuronal activity stops on cessation of blood flow due to termination of supply of oxygen and glucose. 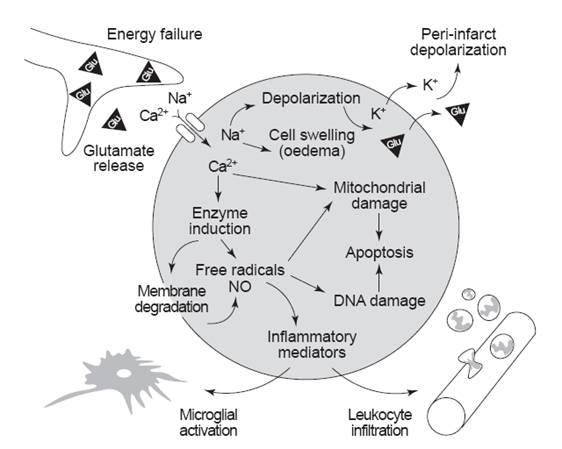 During stroke the blood supply and thus the substrates (oxygen and glucose) supply is impaired. At this point, neurons cannot generate enough ATP to keep their ion pumps working properly. Due to this energy depletion, the resting membrane potential gets interfered, which leads to depolarisation of neurons and glia, and subsequent release of Ca2+ into cells (Bear, et al., 2007. pp 156). Increase in intracellular Ca2+ triggers synaptic release of glutamate. Excess glutamate further depolarise cells and thereby raises the intracellular Ca2+ concentration. Consequently further release of glutamate occurs. Thus, stroke initiates a vicious cycle of excess glutamate release. At this point, excessive glutamate in the extracellular space leads to the following extensively interactive and overlapping excitotoxic events:

Interference with the Glutamate Transport:

Reversal of glutamate efflux: Due to energy depletion and uncontrolled release of glutamate, the ATP levels decreases in the astrocytes, resulting in the failure of the Na+-K+-ATPase pump, which leads to the collapse of the ionic gradient. As a result, the Na+ ions move along its concentration gradient into the cell, while glutamate is released into the extracellular space. This reverse uptake further enhances the accumulation of extracellular glutamate, thus facilitating the development of excitotoxicity. (Moro, et al., 2005; Hazell, 2007)

Excessive accumulation of extracellular glutamate leads to overactivation of glutamate receptors (NMDA) and results into entry of high amounts of Na+ and Cl- ions through the receptor-channels (AMPA). Along with these ions water also enters the cells due to an increase in osmolality. This total influx is much larger than the efflux of K+ ions. This results in excessive swelling and neuronal oedema. This extreme swelling finally leads to lysis of the neurons. This is termed as ‘initial toxicity’, which involvesincreased sodium permeability that results in depolarisation, chloride entry and eventually, osmotic lysis of swollen cells. This is followed by delayed toxicity due to Ca2+ entry (through glutamate receptor-channels and/or voltage-gated Ca2+ channels). (Rothman and Olney, 1986; Choi, 1987 Dirnagl, et al., 1999; Lo, et al., 2003; Hazell, 2007).

During ischemic stroke, generation of ROS is a significant event, which then leads to damage of lipids, proteins, DNA and consequent neuronal damage (Moro et al., 2005). Due to energy depletion glutamate is released at high concentrations ‘within the core of cerebral infarction and at the penumbral tissue’ (Dirnagl, et al., 1999). In these areas, over-activation of glutamate receptors leads to a massive calcium influx. This results in activation of several calcium-dependent enzymes like calpain, proteases, phospholipases, endonucleases etc (Moro, et al., 2005). This is followed by a generation of NO, free radicals and reactive oxygen species (ROS) (like super oxide radical anion, hydroxyl free radical and powerful oxidant peroxynitrite) (Hazell, 2007). They promote damage of lipids (lipolysis), mitochondria and DNA. All these lead to neuronal death through apoptosis. ROS plays a significant role in the process of delayed neuronal death through various cellular signalling pathways, among which mitogen-activated protein kinase (MAPK) pathway (which involve persistent activation of extracellular signal-regulated kinases -ERKs) is a significant one (Stanciu, et al., 2000).

As discussed earlier, following stroke massive glutamate release results into very strong activation of glutamate receptors (particularly the NMDA receptors). This results in an increase in ‘intracellular calcium levels, free radicals production, transient depletion of extracellular calcium through NMDA receptors and voltage-gated calcium channels’ (MacDonald, et al., 2006). There are two phases of calcium influx, and the second one, being very slow, is responsible for delayed neuronal damage (Beilharz, et al, 1995). The initial phase is the cause and effect of overactivation of NMDA receptors, which lead to osmotic swelling and subsequent cell lysis. The second phase is mainly responsible for mitochondrial calcium overload and damage of nucleic acids. Calcium, as discussed earlier, generates NO and ROS through activating enzymes like phospholipases, endonucleases, and proteases. The free radicals/ROS are generated either by the PLA2 activity or through the calcium-dependent NOS pathway. Mainly the second route is responsible during ischemic stroke. (Kristian and Siesjo, 1997; Stanciu, et al., 2000; Lo, et al., 2003)

During ischemia excessive glutamate is also responsible for interfering with the activity of anti-apoptotic gene (Bcl-2) (Purves, et al., 2008. pp 646-647). Inactivation or suppression of the Bcl-2 allows cytochrome-c to be released by the mitochondria (Purves, et al., 2008. pp 646-647). This leads to the activation of caspase-3 (via caspase-9 activation) thus resulting in apoptosis and phagocytosis of the downstream molecules. (Ikeda, et al., 1996; Lo, et al., 2003)

Fig. 4: Figure illustrating the interaction and overlapping between multiple pathways of excitotoxicity that lead to cell death in the brain. [Lo, et al. (2003). Nature Reviews Neuroscience. 4: 400]

Upregulation and Downregulation of Certain Genes:

Following an ischemic stroke, upregulation or downregulation of specific genes contribute in some ways to the excitotoxicity and cell damage.

Fig. 5: Figure explaining the ischemic penumbra and the biochemical events in different layers in the brain. [Dirnagl, et al. (1999). Trends in Neurosciences. 22(9): 394]

For instance, after stroke there is a reduction in the Ca2+-impermeable GluR2 subunits of the AMPA receptor (Lo, et al., 2003). In some cases, downregulation of the Group I and II metabotropic glutamate receptors have also been reported. The exact causes are not known for these gene regulations, but all these favour the release of excessive glutamate. Apart from those genes, some inflammation-related genes are also upregulated which further increases in cell injury (Dirnagl, et al., 1999).

Complexins are highly charged molecules found at the presynaptic nerve terminals and are key regulators of synaptic exocytosis (Fasshauer, 2008). They bind to the neuronal SNARE complex and are involved in calcium-dependent release of neurotransmitters. Mainly two forms, Complexin I (localised at the inhibitory synapses) and Complexin I,I (localised in the in axodendritic and axospinous synapses, which are mainly excitatory) are found in the human brain. It has been established that complexins are involved in the glutamate mediated excitotoxicity, but their clear roles are yet to be established. (Hazell, 2007)

There have been lots of research activities in recent times regarding the pathophysiology of excitotoxicity caused due to stroke. Researchers have been pretty successful in identifying the complex and overlapping pathways triggered due to excitotoxicity, which leads to ionic imbalance, oxidative and nitrosative stress, inflammation and apoptosis, by performing in vitro and in vivo experiments. The excitotoxic effects following a stroke are short-term, but the downstream effects are long lasting and so potentially life threatening.

Despite extensive basic research, the clinical trials for stroke-mediated excitotoxicity have been unsuccessful. Some of the proposed treatment strategies are employing NMDA-antagonists, antioxidants and enhancement of glutamate uptake. It is pretty clear that the intracellular Ca2+ is regulated by extracellular Ca2+ and Mg2+. So, controlling their concentrations will be beneficial in terms of blocking excitotoxicity (Lo, et al., 2003). Development of clot-lysing drugs is also a promising strategy in this field. More importantly, it would be better to prevent ischemic strokes rather than blocking excitotoxicity. Some of the risk factors for stroke are high blood pressure, high cholesterol level, diabetes, smoking; all these factors may lead to development of atherosclerosis (astherosclerosis) and thus blockade of blood vessels. Thus, leading an overall healthy life will be more beneficial, since it is very much true that ‘prevention is better than cure’.

Hazel, A. S. (2007). Excitotoxic mechanisms in stroke: An update of concepts and treatment strategies. Neurochemistry International. 50: 941-953