This essay attempts to answer the question what does an examination of the financial statements of Tesco and Morrison’s tell us about the performance and direction of these companies? In order to accomplish this, we carry out Dupont and ratio analysis as well as a common size income statement for both companies and draw conclusions from said analysis. A discussion will also be provided as well as possible caveats of using financial statements as a way of coming up with a picture of where the company is and where it is headed.

The tax burden indicates that, on average during the last two years, the net earnings (NE) for Tesco has been 76.3% of the earnings before tax (EBT), indicating that about a quarter of the NE of the firm is usually reserved for taxes. At the same time, Morrison’s has an average of 71.8%, which is comparable to Tesco’s.

The interest burden shows that for Tesco, the EBT was 56.6% of the earnings before interests and tax (EBIT), showing that nearly half of the profit before tax went away on operating expenses and interest payments. Morrison’s seems to have a better control over their debt and interest payments, EBT being equal to 76.8% of their EBIT on average.

The average operating margin is 4.1% and 2.7% for Tesco and Morrison’s respectively, indicating that Tesco has had lower operating expenses in relation to revenue.

The average asset turnover reflects a potential higher efficiency in terms of how the assets are being used to generate revenue on Morrison’s part with a ratio of 1.65 (for every £1 of assets, there is £1.65 of revenue gained).

Also, Tesco shows an average financial leverage ratio of 4.47 (for every £1 of equity, there is £4.47 of leverage), which is nearly twice the level of Morrison’s leverage, showing again a potential better control over debt at Morrison’s.

Tesco shows clear signs of being more efficient with its direct costs as it has higher gross margins.

After deducting taxes, the difference in NE margins do not seem significant. This could be caused by the higher levels of leverage that Tesco has, meaning higher interest payments.

On average, the return on equity is about the same (Tesco has done surprisingly well during the Covid-19 crisis).

The current and acid test ratios show that neither of them has enough short-term assets to cover for their short-term obligations as the ratios at any given time as they are below 1. However, this is commonplace in the industry. Tesco also has the upper hand here as its ratios are significantly higher than its competitor.

The cash margin is very low in both, which could be an indication that they could have liquidity problems in the future. However, given the nature of the industry, it is unlikely that the government would let these companies go bankrupt, especially during the pandemic.

As it was explained earlier, Morrison’s has an advantage over Tesco in terms of debt management. Both gearing and debt-equity ratios are lower on Morrison’s, suggesting a healthier capital structure and more resistant to liquidity issues. 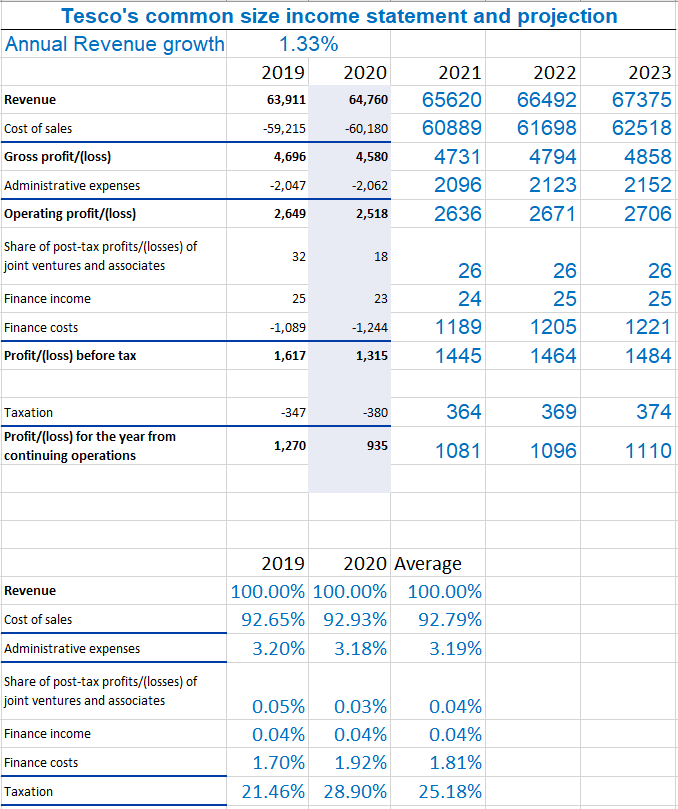 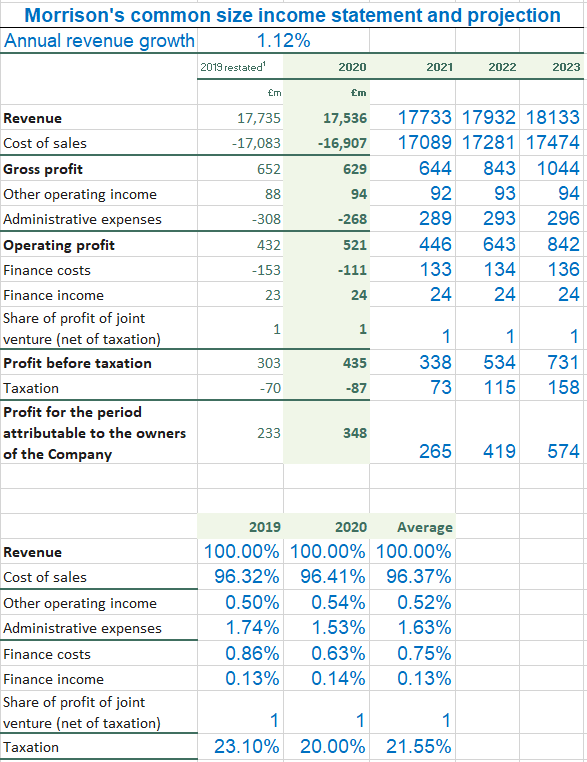 For the common size analysis, the line for discontinued operations has been removed. The Morrison’s average revenue growth for the previous two years was -1,12%, so a positive 1.12% has been used instead. The profit share of joint venture has been assumed to always be 1M. All of the elements in the common size statement have been taking in proportion to revenue, except for the tax rate, which has been taken from EBT.

Morrison’s has higher costs of sales, confirming what was mentioned earlier about Tesco being more efficient with the direct costs of production. However, Morrison’s shows higher efficiency with indirect costs, indicated by a lower proportion of administrative expenses. Tesco has greater operating income due to its high revenue but when contrasting the proportion of administrative expenses to revenue, one can easily see that Tesco is not as efficient in this field.

This projection is fairly accurate as it uses the average proportion of the last two years for every line in relation to revenue. Nevertheless, It is believed that the future performance of the firms is likely to be better than what the projection above shows. The Covid-19 pandemic is expected to improve over time, and this may lead to potential higher sales as the economy recovers.

After analysing the financial statements of both firms, it is easy to deduce that it is business as usual. The situation is not likely to change in the near future. Both are meant to continue being the industry leaders that they are.

As they provide with first-necessity goods, there is a decent level of resilience during economic recessions. This is something that investors and shareholders consider when deciding to buy or hold shares.

Once it has been established that the firms are set to continue their operations into the future successfully coming through the other side of this Covid-19 pandemic, it is unavoidable to ask the question – how reliable are the financial statements and their reports, actually?

The analysis in this essay has been carried out with the assumption that the firms involved reported their earnings, financial positions and cashflows with accuracy and honesty. Unfortunately, this is not always the case.

It has been reported in literature that companies are bound to use creative accounting to manipulate financial statements in their favour, ignoring shareholders’ interests. (Gowthorpe and Amat, 2005). This raises obvious ethical concerns. How would shareholders trust the financial reports if there is a chance for it not reflect the actual position of the company? It is simply not possible to accurately know whether a company is not being straightforward in their reporting and therefore the only course of action for an investor would be to trust the information provided.

It has also been shown that letters to shareholders (or corporate reports for that matter) are usually written in a way that it downplays the negative performance of the firm. Even during bad years, the number of good words outnumbers the number of bad words in their texts, basically embellishing the actual position of the firm (Hildebrandt and Snyder, 1981).

In an attempt to draw a more accurate representation of where the company find themselves in the market landscape, an investor would look for non-financial-reporting, complementary information about the company, like where they stand in terms of corporate social responsibility, executive compensation or remuneration.

As trivial as this may sound to some, evidence has been found that indicates that not complying with corporate social responsibility could in fact be seen as a lack of proper risk management and therefore stop investors from acquiring a stake in the company (Spicer, 1978) (Alexander and Bucholtz, 1978).

As a matter of fact, it has been reported that there is a correlation between firms that have strong corporate social responsibility and a significant improvement in accounting performance in comparison to those entities with no CSR policies (Sturdivant and Ginter, 1977) (Lipczynski et al, 2017).

Smith et al (2010) wrote about the positive effects that CSR has on firms in terms of reputation. When people learn about any CSR practice of a firm, they assume that this firm is socially responsible in all areas, the so-called Hallo effect. This helps to make people feel more approachable, which may mean reputational escalation and therefore potential improved performance.

This essay has provided an answer to the question What does an examination of the financial statements of Tesco and Morrison’s tell us about the performance and direction of these companies?

Upon examination of the financial statements of both companies, it has been concluded that even though both firms have been negatively hit by the Covid-19 pandemic by reducing the levels of revenue, this is only temporary, and it is expected that both companies produce better results in the upcoming future. Dupont and ratio analysis, and a projection of potential income for the next three years has been carried out, all suggesting that the future is bright for both entities.

Additionally, a discussion about potential problems regarding the reliability of financial statements has also been included, as well as a commentary on the usefulness of information alternative to financial reporting, such as a firm’s corporate social responsibility policy.

Appendix – calculation of ratios and percentages 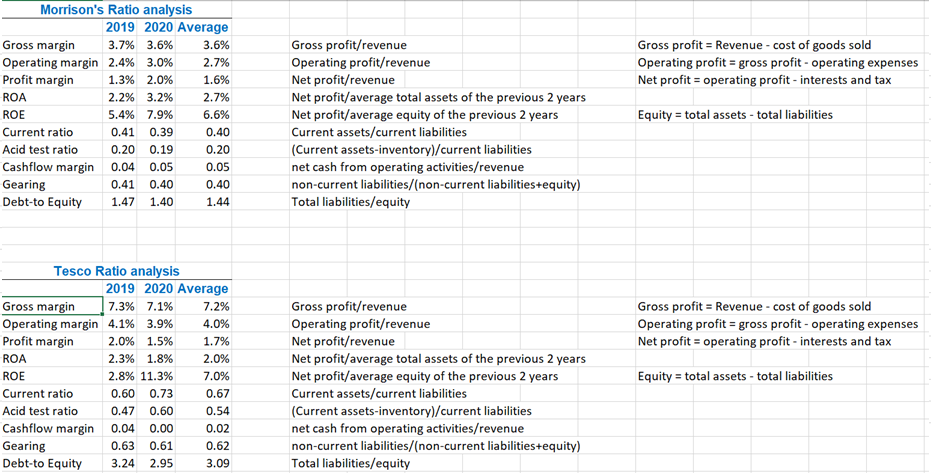