The oil filters used in aircraft engine oil lubrication are designed to remove solid particles and contaminants from the oil during its circulation through the system. Solid particles in the engine oil could be disastrous during engine operation as they can damage engine parts such as bearings and clog passages and could result in engine failure. In addition, the oil can get contaminated due to operational conditions, for example, a dusty environment, high operating temperature, etc. There are different types of oil filters in aircraft lubrication, and the filtering element comes in a different configuration. Figure 1 shows the schematic representation of an oil filter used in aircraft. It consists of a housing with the filtering element and relief valve. If the filter element is clogged, the filter bypass valve or relief valve diverts the oil flow from the oil filter. The pressure difference was created due to the clogged filter opens the bypass valve. As soon as the bypass valve opens, oil filtering is stopped, and the entire oil flow is bypassed to the engine to avoid the ‘No oil’ scenario (Heiserman, 2015). Although supplying contaminated oil to the engine is also dangerous and could be fatal if care is not taken to restore the filtering function to normal. 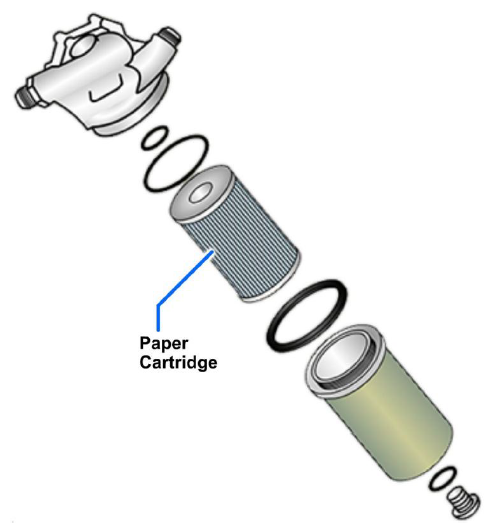 There are primarily two reasons why the oil filtering system goes into the bypass mode (Heiserman, 2015).

Procedure to recover from bypass

Lubrication is essential for moving machine parts, especially in aircraft where lives are at stake. This research report introduces the oil filter, its function, along the function of the bypass valve. It also discusses the reason due to which bypass valve actuates. Finally, the standard procedure is listed to replace the engine oil filter element to restore the airworthiness of the aircraft. It is necessary to note that every aircraft has a different oil lubrication system and type of oil filter; this research paper discusses a generalized method to replace the oil filter.