Essay on Phonology in Kinyarwanda

Kinyarwanda is an official language of Rwanda arising as a combination of the Rwanda and Rundi languages of East Africa spoken by the inhabitants of the country. The language is spoken by all native populations in the country as compared to other countries within the region (Kimenyi, 1980). The language is tonal with a contrast between low and high tones that contrast each other interchangeably influenced by complex phonology rules. For example, the sequences “ki” and “ke” may be changed during pronunciation to produce high tones [ki] and [ke] or [ci] and [ce] based on the preference of the speaker. On the other hand, when letters ‘a’, ‘e’, or ‘i’ come at the end of any word and then are followed with a starting vowel, a pattern of omission is used to make the orthography the same.

Languages differ based distinctive accents that are used to define them. The phonological system of Kinyarwanda differs from English due to the difference in the physical structure of parts of the sound system (Rose, 2004). These differences are used to explain the phonology of the language under discussion. The essay will analyze theoretical analyses of the Kinyarwanda language based on phonology, syntax and semantics. This analysis will reveal how the phonology of the language is used to portray the required meaning of words.

Phonology is an analysis of a language to understand the pattern of sound that are used to generate meaning thus enabling the user to translate from one language to another or from audio to text. In language analysis proficiency is determined when an individual makes grammatically complete acceptable and well-formed sentences (Kimenyi, 2002). Therefore, to understand Kinyarwanda well, the language has to be analyzed based on phonology, syntax and semantics. Phonology forms the rules of how sounds are pronounced and combined to form words and sentences. It focusses on sound patterns in languages through organizing speech sounds in languages to carry different meanings. Speech sounds are usually organized in the mind before they spoken to enable the listener understand what the speaker implies.

The language has contrasts high and low tones influenced by complex phonological rules. This differences in tone play both lexical and grammatical functions used to differentiate words that segmentally the same as shown in table 3.

Therefore, the major rule governing tone falling in Kinyarwanda is tone anticipation and tone dissimilation by the speaker. For example, high tones in the syllable-final position fall after application of the tone anticipation rule if the word is taken in its citation rule. To anticipate the speaker has to shift the underlying high tone to the preceding syllable while in tone dissimilation the user lowers the high tone of the preceding morpheme as used in “umuryaango” to mean family and “umuryáango” to mean door. Further, any word can lose its tone or acquire a new one depending on the position that the word occupies in a sentence. For example, Geenda/ku-geend-a/ ‘go’<>vuga/ku-vúg-a/‘talk’ and Ubu géenda‘now go’<>ubu vúga‘now talk’.

Kinyarwanda uses 16 of Bantu nouns that are grouped in 10 pairs to differentiate between singular and plural forms. 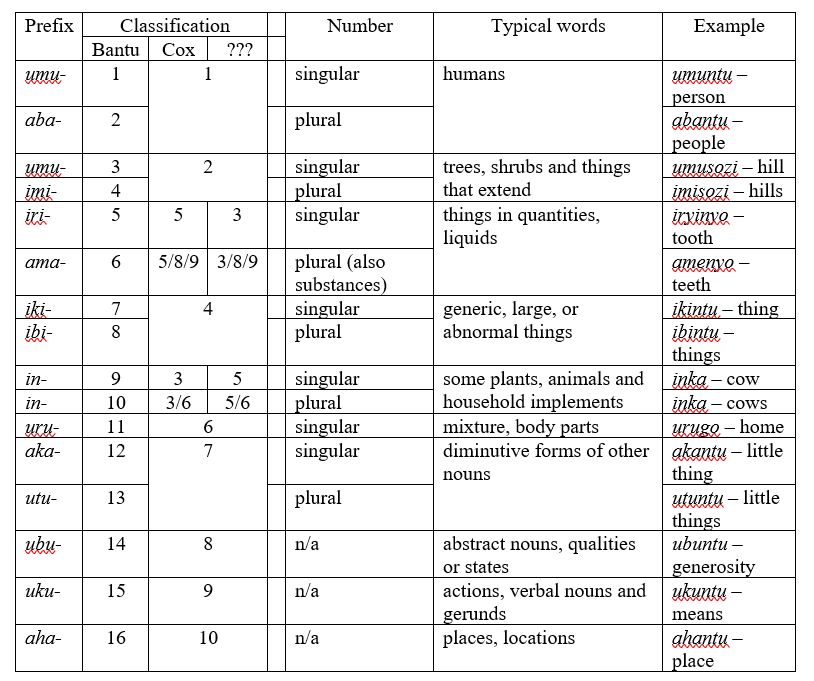 However, Bennett (2015), adds that verbs of the Kinyarwanda languae start with the letters “ku” which are morphed into “kw” when used before vowels and into “gu” when they appear at the beginning of a consonant from Dahl’s law) as shown in the table below. Therefore, users remove the infinitive prefix and replace it with a prefix agreeing with the subject and then a tense marker is inserted to make the sentence grammatically correct.

Kinyarwanda is an SVO language where modifiers follow nouns. However, it differs from other languages in the group since it has subject-object reversal, the wh-question in situ and it lacks relative pronouns (Zeller, 2008). The changes in the object-subject order are used to change the subject positions to put both the subject and the object after the verb and then prefixing the verb a locative morpheme ha- without changing the meaning. For example, “Ha-ra-som-a igitabo umwáana” which means ‘It is the child who is reading the book’ instead of being ‘the child is reading the book’.

In phonology, analysis of verbal expressions must use tense and aspect. The Kinyarwanda tense is complex with several semantic systems that characterize the relationship among events. Tense expression in the language differs from English based on the choice of morphemes belonging to different systems and combining them into a verbal construction to give the required meaning. Bizimana (1998) argues that unlike English the language uses a complex unit with diverse interaction of grammatical categories that intersect with each other. Kinyarwanda uses two morphemes having the form “ra”. One common morpheme is associated with the absence of an external complement where the “ra” is noted by the subscript -ra –c. The speaker shifts tones from high to low and vice-versa to give different meaning to words (Kimenyi, 2002). Just like in English some words may carry the same letters but when pronounced differently they carry different meanings. This word use means that morphemes can be used to give different semantics to enable the user to understand what the speaker is meaning and differentiate between the spoken word and the written text.

From the analysis of the three areas of the Kinyarwanda language, I conclude that the language can be easily translated to another language once its phonology has been understood. In the paper, I was seeking to present the phonology of Kinyarwanda and how the language can be translated to English or any other language using phonology and phonetic rules. The user needs to understand the alphabet, vowels, consonants and the way verbs are created to construct appropriate words. However, to differentiate between words and their pronunciation which leads to different meaning requires an understanding phonology, syntax and semantics of Kinyarwanda, one can translate or learn the language easily.

Kimenyi, A. (1980). A Relational Grammar of Kinyarwanda. Los Angeles: Uniersity of Carlifornia Press.

Kimenyi, A. (2002). A Tonal Grammar of Kinyarwanda : An autosegmental and Metrical Analysis. New York.: The Edwin Mellen Press.