Directive 99/31/CE, the regulations governing the landfilling of bio-waste, dictate that in future years there needs to be a sharp reduction in the volume of biodegradable materials going to landfill. The main aim is to effectively reduce the production of methane, known for its high global warming potential, at landfill sites and to improve overall conditions in which landfills are operated.

In recent years, the key question became, what will be the best way to manage biodegradable waste and to divert it from municipal landfill sites as stringent requirements were laid down and penalties were implemented. Frequently, the trade-off of cost, technology and resources is at the centre of optioneering studies, with a balance often being sought between the different forms of bio-waste treatment techniques.

Mechanical-biological treatment (MBT) of bio-waste provides a degree of flexibility for treatment of bio-waste, both in mixed collection and source separate collection and has shown impressive growth as the choice of treatment technique for bio-waste throughout the world. Many strategies developed in recent times emphasise that a clear system of implementation needs be followed when determining future waste management developments. Hence, these principles will also be considered in developing the bio-waste treatment strategy for Festive City. The governing elements that will influence the choice of technology were derived from the following:

With reduction of biodegradable content of landfilled waste in mind and the added need to increase the rate of recycling across Europe, the UK Government’s vision for sustainable waste management as outlined in its Waste Strategy 2000 report is to substantially reduce the volume of landfilled waste. Figures suggested that between 2004 and 2005, the recycling figure for England was approximately 23%. This resulted in a national recycling target of 25% being set for 2005/06. Each local authority was also mandated to achieve a set target for recycling and biodegradable diversions.

Festive City, as a move towards achieving its recycling targets and re-directing biodegradable materials from landfills, has decided to optimise its integrated waste management programme by implementation of the following:

1.1 Assumptions Made about Festive City and its Waste Management Programme

The Festive City Council opted to reduce its biodegradable waste fraction to landfill and optimise its recycling capacity by collecting the organic waste and composting it to produce a material suitable for soil conditioning. Agreements were made with investors to purchase all compost produced by the Council provided production operations and product quality are in accordance with the PAS 100 specification and, if meat/food wastes are included, the animal by-product regulations (ABPR) must be satisfied.

To satisfy the PAS 100, which calls for source separation of organic waste, the existing collection system will be upgraded, providing bio-bins and modifying the waste collection regime of Festive City.

Organic solid waste in Festive City comprises approximately 40% of the MSW waste stream and the disposal of these materials directly into the environment (or landfill) would trigger rapid transformation by soil organisms resulting in several adverse effects such as the production of ammonia (NH3), hydrogen sulphide (H2S) and methane (CH4), which are known environmental pollutants. Composting is a well-established method for stabilising and sanitising biomaterials. The technique has been practised since even before Roman times, and the method has since been streamlined in terms of efficiency, time of completion, health impacts and the area requirement. Composting of MSW, agricultural wastes (plant residue, animal manures), food factory wastes and municipal waste water treatment solids is increasingly used worldwide as a means of waste management, but its application as a major treatment technique in waste management is expanding rapidly in response to new legislation aimed at reducing landfill disposal of biodegradable wastes (DEFRA, 2004). Composting is defined as a controlled aerobic, biological conversion of organic wastes into a complex, stable material. The residual compost has been described as hygienically safer, more aesthetically appealing and substantially lower in odour than the original MSW, producing reduced waste volume, safe from pathogens and other unwanted organisms with preservation of the nutrient content useful for plant growth.

While a number of recycling operations are currently being carried out by Festive City, composting is deemed as the Best Practicable Environmental Option (BPEO) for diverting the biodegradable waste from landfills; it also increases the recycling rates.

The new waste management scheme and treatment process was initiated based on drivers and is bonded under certain regulatory systems, which include:

Materials for the compost will be source separated biodegradable from non-biodegradable that have not been mixed, combined or contaminated with other potentially polluting wastes, products or materials in accordance with PAS 100 input material specifications. Biodegradable polymers, bags and packaging or similar products will only be permitted if they conform to quality standard BS EN13432. Waste acceptance criteria will be developed for waste disposed of at the composting facility.

The ABPR also state that CAT1 – materials suspected of being infected with BSE/TSE – cannot be used for composting.

Due to the increased concerns about the potential impact of composting on human health, which include exposure to elements such as bio-aerosols, bacterial and fungal spores, the Environmental Agency (UK) advises that a 250 metre stand-off distance should be applied between a compost site and residential/commercial areas.

Site selection for composting facilities may raise a lot of issues which were not considered at the inception and could raise a series of future problems and non-compliance. Two key factors that create worry for many waste treatment developers are:

Composting facilities are generally identified by their unpleasant odours and unattractive airborne pollution. The site should be located at a distance away from residential areas to prevent odour nuisance which is the major problem of composting. Air quality can be a material planning consideration as well as a pollution control issue.

Dust control is very necessary especially during dry weather. Dust could be generated from the tipping floor, screening, placing feedstock in windrow and shredding.

Assuming that the biodegradable fraction (BF) of the household waste represents 40% of the waste stream, (DEFRA, 2004)

Festive City previously ran a 2-bin collection system, conducted by the Council, for which,

The assumption made for the existing collection system includes:

In an effort to comply with the PAS 100 specification for compost, the organic-biodegradable fraction of the waste stream will be separated at the source. This will be achieved by the implementation of an additional household Bio-bin, specifically for organic household waste i.e. putresibles, catering/kitchen waste, garden waste and specific cardboard and paper. The bio-bins will be of two forms, taking into account the needs of the high-rise blocks, the conventional households without gardens and the conventional houses with gardens.

Box bin will be an 80 litre low density recyclable plastic box with lid.

Recyclables (paper, selected plastics and metals) and the residual waste will be collected monthly.

The organic waste collection will be collected on a weekly basis using non-compaction waste collection vehicles. The dry recyclable and residual waste will both be collected on a monthly basis, using the same collection vehicles. Each household will be given a bio-bin for the collection of garden waste only depending on their category (apartment, conventional with garden, conventional without garden). The type of waste and the schedule of collection will also be provided. A household amenity site (or tip) where garden waste can also be recycled will be provided for residents who exceed their bin’s capacity.

The process adopted for this composting facility is an in-vessel system. Following the source separated collection, the material will be deposited at the composting facility, where it will be held in a reception area, followed by feeding into the treatment process. However minimal separation will be done to remove large contaminants such as plastic bags and metals. The stages of treatment include shredding and wetting, sanitisation in successive barrier tunnels, maturation, followed by screening and grading and final testing to conform to PAS 100 specification. A schematic layout of the treatment processes of the composting facility is shown below. 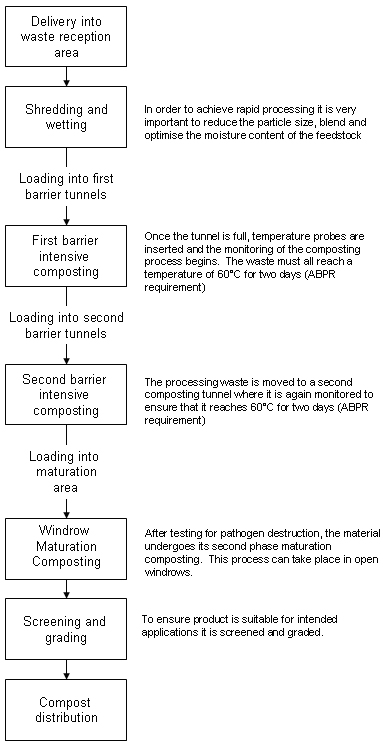 Working days per week = 5 days (Monday to Friday) – no operation on bank holidays.

The Reception area will comprise a concrete floor and steel framed building. The building will allow the disposal trucks direct entry into the tipping area to minimise and control odour as well as the effects of wind, birds and vermin. The reception area will allow for a two-day retention/storage time of waste. However, the area will be of sufficient capacity to accommodate any increase in organic waste throughput into the plant that may result in regulatory changes for waste treatment, increase biodegradable diversions or upgrading of unit processes to maximise the throughput of the composting facility. The structure will be sealed and maintained under negative pressure to minimise the occurrence of odour migration. The extracted air will be incorporated into the main processing area odour treatment unit which will be treated using bio-filters. The floor area design was based on the daily waste input and the throughput of the composting process and will comprise a tipping area and a vehicle access and turning area. The layout of the tipping area is shown in the figure below. The Reception building will be compliant with the HACCP plan. 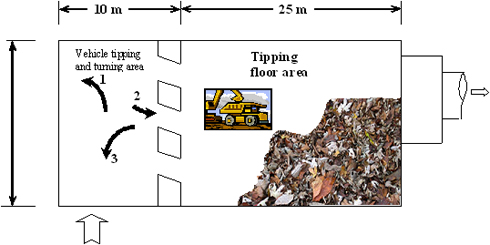 Although the origin of the waste is source separated and should require no major screening process, a simple screening system will be employed to remove bulk soil, sand and plastic bags often encountered in garden waste. The unwanted residue from the screening process would transfer to the MRF along with those derived from the back-end screening process

The optimum particle size for composting represents a compromise between maximising the surface area to volume ratio and minimising resistance to air flow through the matrix. The method that would be used to reduce the material size is the shear shredder, due to the fact that we are dealing with an organic waste, making this shredder most suitable.

This process will be conducted in a Drive-through Composting Tunnel. Built of pre-cast concrete walls and roof with an easily removable steel door and lightweight hinged upper doors at both ends, it can contain 40-50 tonnes of waste at any one time. The doors at both ends facilitate the one-way flow of materials through the plant as required by the animal by-product regulations. The tunnel is equipped with air supply pipes based in the floor connected to an Air Handling Unit and temperature monitoring equipment and radio-telemetry to provide the operator with full process management data. 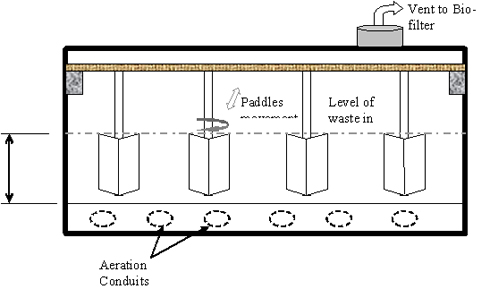 The material having been sufficiently cured, the final stage of screening or shredding and grading will soon follow. The material will pass through a sieve to produce material in accordance with PAS 100 specifications and residual material will be disposed of at a landfill. The relevant testing as outlined in section 8.2 above will be conducted.

On satisfactorily passing the test, the compost will be distributed to the compost packaging and marketing companies.

The composting process will be conducted as illustrated in the diagram below: 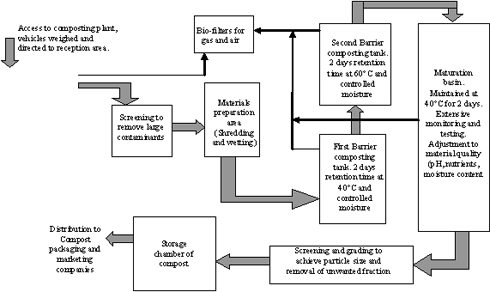 About me:
I am a Civil Engineer with a graduate degree in civil engineering and a postgraduate degree in environmental engineering and project management from the University of Leeds; who currently offer courses in the water, wastewater and energy sector, my fields of choice for an intended career. I have an undying interest in research, writing and presentations, which saw me complete a number of technical papers and international presentations. I intend to pursue doctoral studies in the near future in an area of civil or environmental engineering. While my formal qualifications centre around the water and environmental fields, my work experiences have allowed me to be exposed to a number of other sectors including construction, international development, project management and monitoring, to name a few. Now I relish the opportunity to undertake freelance writing to satisfy my need to gain new knowledge and perhaps become published myself.