Within the process of cathodoluminescence in semiconductors, electrons with high enough energy can cause electrons in the material to be excited to the conduction band. This leaves behind a hole and when an electron recombines with this hole, a photon is emitted due to the difference in energy of the two states. The probability of photon emission and the wavelength of the emitted light are dependent on the structure of the luminescent material. Therefore cathodoluminescence is a very useful scientific technique for determining the microscopic properties of particular materials, particularly semiconductors such as diamonds. Cathodoluminescence also has a wide range of practical applications – most obvious is its use in the cathode ray tubes of television and computer screens to create light emission.

Cathodoluminescence has been used in scanning electron microscopes or cathodoluminescence microscopes to study the internal structures of various materials. It has proved useful in obtaining information about material composition, quality and growth. A beam of electrons is fired at the sample, causing cathodoluminescence, and the resulting photons are transmitted by a fibre optic to a monochromator and then detected by a photomultiplier tube. The microscope can be scanned over many points in two dimensions to create a cathodoluminescent map1. This method of imaging has several important advantages, including resolutions of one nanometer and the ability to measure an individual spectrum at each point. The photomultiplier tube could be replaced with a CCD camera which would allow time-dependent measurements resolved down to a nanosecond or picosecond scale. Examination of the variation of optical properties across the surface of the material allows us to infer the structural properties.

One particular scientific application of this observational technique has been in the spectral and spatial resolution of diamond nanoparticles3. Nanodiamonds were first produced in the USSR in 1963, but were not thoroughly investigated until the 1980s–1990s4. During the short period of research, many useful applications have been found for these particles. Applications for luminescent nanodiamonds have been found in biomedical imaging due to their relatively low toxicity5. Nanodiamonds have also been investigated for use in nanoscale magnetic sensors6. The first nanodiamonds produced were the result of a detonation technique4, but a vast number of alternative production techniques have since been developed, including laser ablation7 and high-energy ball milling8. Recently, nanodiamonds have been created much more easily by the dissociation of ethanol vapour using a microplasma technique9.

A nanodiamond is a nanoscale chunk of carbon, containing only a few hundred atoms. They consist of pure carbon, apart from impurities which make up less than one per cent of their structure. Because quantum mechanics is dominant at this small scale, nanodiamonds do not necessarily exhibit the same properties as their larger counterparts. The structure of a nanoparticle consists of a crystalline core surrounded by a fullerene structure. 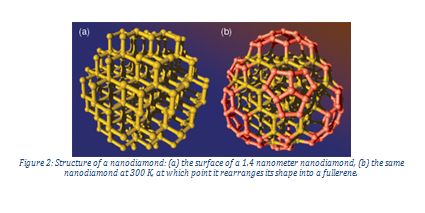 Cathodoluminescence has contributed to the understanding of nanodiamond properties and allows for their use in medical imaging. Nanodiamonds can be spectrally and spatially resolved by making use of colour centres. Colour centres are defects in solids which absorb light of a particular colour and therefore provide the solid with a characteristic colour.

In 2012, Tizei and Kociak3 were able to spatially and spectrally resolve the light produced by the cathodoluminescence of nanodiamonds. They used a transmission electron microscope with an 80 keV fast electron beam. They demonstrated that their method allowed the detection of a wide range of individual colour centres in separate nanodiamonds separated by extremely small (sub-wavelength) distances. In particular, they emphasised that they had managed to spatially discern the spectra of two individual emitters separated by just 80 nm inside a nanodiamond created by nitrogen-vacancy colour centres.

Recent research has also exposed the potential usefulness of the cathodoluminescence in nanodiamonds in medical imaging10, 11. Silicon-vacancy as well as nitrogen-vacancy colour centres provide opportunities for this. Because of the excellent biocompatibility of nanodiamonds and their bright colour centres under cathodoluminescence, it is believed these particles may provide a very useful technique for nanoscale imaging of biological structures.

Nanodiamonds have also played a role in astrophysics. They are by far the most common presolar grains found in primitive meteorites and it is believed that they form a significant component of interstellar dust13. Examination of the properties of these particles using cathodoluminescence will allow more thorough investigation of these particles in astrophysical systems. Colour centres in nanodiamonds have been investigated at a range of temperatures to determine the usefulness of the technique in astrophysics12. Meteorite nanodiamonds were compared with synthetic diamonds. A cathodoluminescent emission peak at a wavelength around 540 nm at 77 K was detected in all the samples. This particular peak is associated with a nitrogen defect. It was found that the peak intensity at lower temperatures was greater. This means that this method of examination may have potential in the field of laboratory astrophysics. Primitive meteorites have been found to contain up to 1500 ppm of nanodiamonds. The origin of these nanodiamonds is still uncertain, although it is believed they may have been formed by chemical vapour deposition or shock origin.

[12] A. Gucsik, et al., Cathodoluminescence Microscopy and Spectroscopy of Micro- and Nanodiamonds: an Implication for Laboratory Astrophysics