Federal Aviation Administration regulates manned aviation that provides efficient, secure, safe, and environmentally friendly air travel within the USA. However, the noise created by the aircraft is also regulated by the FAA, especially for sound level pressure when the aircraft is close to the ground (Patchett, Jump & Fisher, 2015). Therefore, reducing the noise of an aircraft is of prime importance to create and maintain a positive relationship between the general public and the aviation community. Similarly, one of the rapidly growing segments of the aviation industry is an Unmanned aerial system or UAS, and they also tend to produce higher noise, and the reason is their propellers. Therefore, engineers are working tirelessly to reduce the noise of propellers used in UAS. This research paper discusses the possibility of minimizing the audible impact of small UAS propellers achieved by reducing sound pressure level (SPL) due to modifying the leading edge (Callender, 2017).

One of the hot topics in academia and the industry is the Unmanned Aerial System (UAS). Their popularity is their low cost of developing and manufacturing, and their growth has been experienced in the military and civil market. The popular one amongst the UAS is the rotary-wing type. The most crucial component of the unmanned aircraft is the small UAS propeller that facilitates the transfer of electrical energy into kinetic energy needed for flying (UAS, 2016). However, according to part 107 of the FAA, the altitude of the UAS is limited to 400 feet. This regulation has made the UAS fly close to the ground resulting in an increase in noise from propellers. Therefore, the active area of research in UAS is reducing noise from propellers (Patchett, Jump & Fisher, 2015).

The barn owl and the great grey owl have unique features in their flight feathers. Their flight feathers have comb-like structures and soft tufted trailing feathers. Characteristics of these feathers are shown in figure 1 in the appendix. The flight of these owls is quietest. These characteristics have been researched by the scientist to be incorporated in UAS to reduce the noise. These owls do not impact their surroundings and allow them to hunt efficiently (Clark et al., 2017). Although the small UAS has a different mission than that of owls, noise creation by small UAS could produce negative perception in public and prove harmful.

The test rig created by Callender (2017) is shown in figure 2 in the appendix and contains propellers of small UAS and electric motors. A lithium polymer battery pack of 3000 mAh was used as a power source for the motor. The propeller has two blades and a fixed pitch (Callender & Robinson, 2016). Figure 3 in the appendix shows the modified propeller with serrations.

A comparison has been made between the modified as well as a non-modified propeller. A modified leading edge’s thrust and sound pressure level were less than the non-modified leading edge (Wisniewski, Byerley, Heiser & Liller, 2015). Therefore, it is necessary to create more thrust, a modified leading edge propeller has to be operated at a higher speed, but even at a higher speed, the noise created by the modified propeller is less than that of the non-modified propeller. Sound pressure level increases with the increase in speed due to thrust demand. The effectiveness of the leading-edge comb modification at a lower speed is due to an automatic reduction in sound amplification achieved by propellers operating at the lower speed. Further efforts are required to reduce the sound pressure level by unarming the thrust of the UAS propeller.

Figure 1: Flight feathers of an owl showing serrations and hair on the upper surface (Callender, 2017) 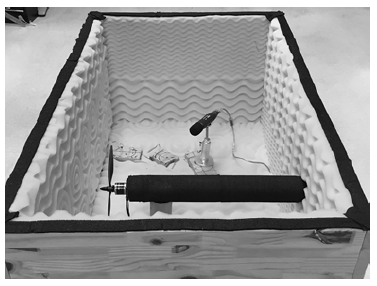