Essay on Tourism and Hospitality

The objective of the report is to provide information regarding the different costs that are part of the final product of a product or service that is being served by a business. The report mentions about two types of costs which include the Fixed Costa and the Variable Costs. The report provides detailed information about the nature and behavior of these costs and presents how the business is utilizing these costs for making prediction regarding the final expenses of the business for the duration of 24th-27th September 2021.

The cost analysis and forecast of the total expenses that would take place in a company is bifurcated depending upon their nature. The two types of costs that are known for the computation of the final costs of the business are the fixed cost and the variable costs. These are two very important costs that play a big role in the determination of the total costs employed on a product or a service (Hviid & Olczak, 2016). There is difference in the nature and behavior of both the costs and also due to the change in the behavior of these costs in the business, the impact on the final price can be observed.

The Fixed costs are the costs that are associated with the operations of the business in compulsion. There is no substitute of the fixed costs and the company has to pay these costs irrespective of the internal or external factors that might have impact on the performance of the company. The fixed costs are also known as the Overhead costs. The key fixed costs include the lease and rent payments, utilities, insurance, salaries and interest payments. In the case of the case study, the Fixed costs for the business of Mt Buller Apartments are Full time Staff wages, electricity charges, Phone and internet charges, Room cleaning charges. These costs are fixed and the organization would have to pay this amount irrespective of any situation.

As per the case study, the total variable costs of the business are Casual Staff Charges, Water Usage Charges and Reservation System Fees. Under this, one expense that is fixed but it can be considered as a variable cost is the Linen Cleaning Charges. As per the nature of the business, linen cleaning is considered as utility and as the guests usually consume the rooms, it is a fixed cost for the company as they have to provide clean linen to the customers. But, in this case when there is less occupancy in the apartments, the costs of linen cleaning can be considered as a variable cost as the linen may or may not require cleaning due to les occupancy. 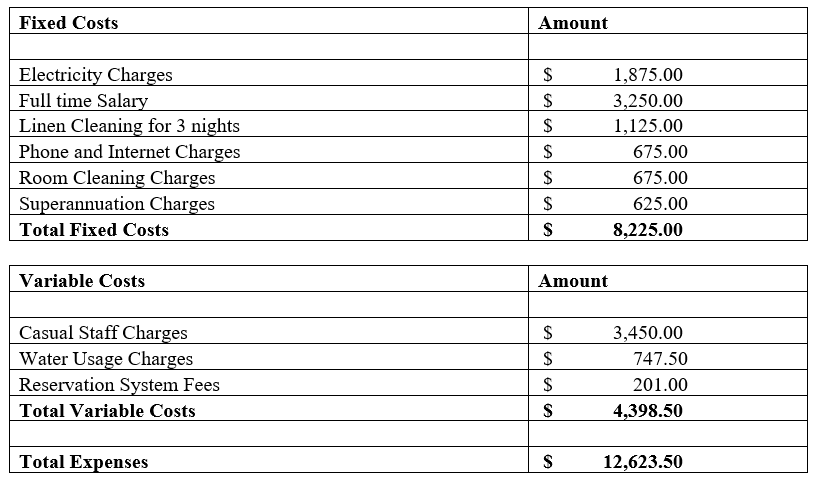 The BEP analysis of MT BULLER APARTMENT RENTALS in Victoria requires some assumptions such as current occupancy is going to be 100% as it is overbooked for the season. Moreover, the variable cost per day is not measured as fixed cost is provided three nights for per room. It is considered that the apartment rents for 3 nights at least. Further, the price of current season per unit of room is $190, which is for 1 night only. Hence, change of three nights will be $570. Fixed cost will remain same despite change in the occupancy rate of the apartment. Further, it is assumed that last season’s room rent was $172.8 per night.

The case scenario of MT BULLER APARTMENT RENTALS in Victoria has stated that room rent per night for the current season will be $190 and all the expenses would increase by 15% due to market reason. Moreover, the case scenario has hinted that change in occupancy rate would increase the variable cost of the business (Kampf, et.al., 2016). Therefore, the change in the fixed and variable cost is shown below where total fixed cost of MT BULLER APARTMENT RENTALS in Victoria could be $9458.75 for the three days from $8225. Moreover, total variable cost of the business would increase from $3825 to $7331.25. the 60% occupancy in the last season has indicated 36 rented customer for the specified three days. On the other hand, the variable cost has increased due to 60 rented room as well as 15% increase in cost. 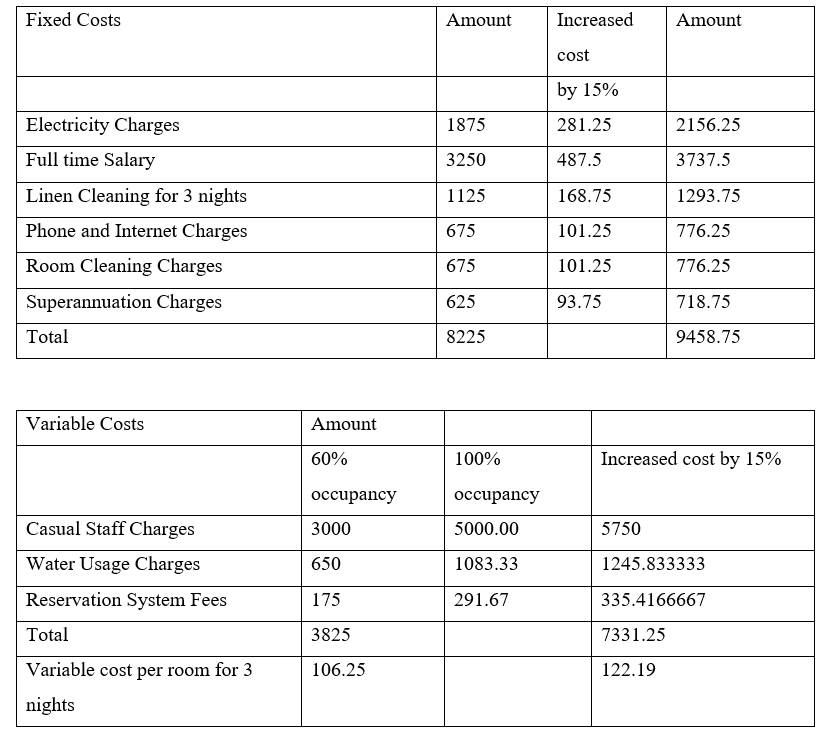 The BEP analysis is done in the following table that has shown the BEP of volume as well as revenue for two periods of MT BULLER APARTMENT RENTALS.

The BEP analysis has shown that last year’s BEP of rented apartment was 20 (approximate value) whereas current period requires to rent at least 22 (21.12 is not possible practically). Further, the revenue BEP is 2120.36 for the last period whereas the ongoing period requires to generate revenue of 2580.86 for reaching the BEP (Arfianti & Reswanda, 2020). The profit of the business was 10118.65 in the last period, which has increased to $24374.69 as per the projection of the current period.